Hi, I am not sure if it is a bug or an expected behaviour but I think it is a problem for GDPR compliance. That info might be also accesible from other apps.

This issue has been reported by a user in our nextcloud instance. That instance, which has an A+ in Nextcloud Security Scan. The instance also has all email privacy scope set to “Private” by default.

The issue has been tested in other instances hosted in different servers.

To replicate the isuue:

While wrintg an email in rainloop app, even if a user has no contacts in his account, rainloop proposes the emails of all the instance users. 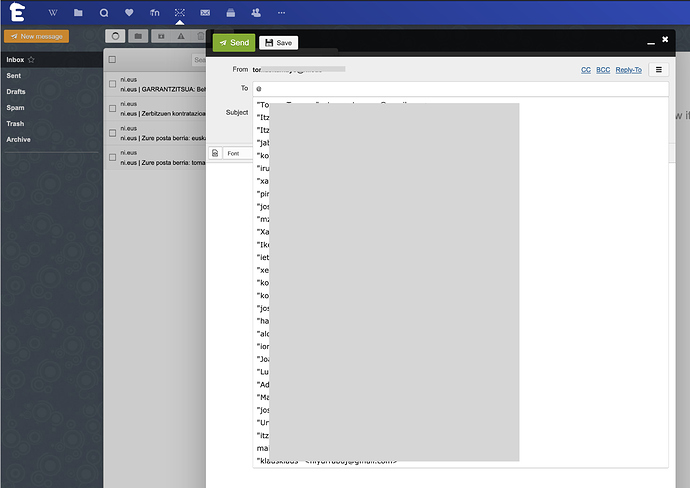 Well, if it is not a bug, is there any way to avoid it?

Maybe, but the leak of information is in Nextcloud Server app, not in Rainloop which is just a client. Anyway, I will write it also in Rainloop’s github.
Thank you!!!

https://github.com/pierre-alain-b/rainloop-nextcloud/issues would be the repository.

Here the report in rainloop-nextcloud github.

Hi, I think this might be a bug (Related with Nextcloud GDPR). When a nextcloud user tries to write a new email,...

The issue has been merged with other thread, here the link:

Suggestions include all local Nextcloud users

We are using rainloop-nextcloud on a big instance with 1000+ users. For this case, we do not want users to find...