In case you find a bug, please file a issue at Issues · nextcloud/talk-ios · GitHub
Please note that a downgrade from a Beta-Version to the Release-Version in the AppStore is not supported. To downgrade you need to remove Nextcloud Talk iOS first and install it from the AppStore again.

do we have iOS-@bug-hunters here?

Yes, I am already using Testflight version of regular app.

@SysKeeper Why is a feature like poll integrated into Talk app and not into regular ios app?
Why not having just one app?

the polls feature (actually „simple polls“) is a new feature of talk and has nothing to do with the dedicated polls app. It allows to open, well, simple polls with a question and multiple answers to choose from.

Why not having just one app?

Is this something GmbH is thinking off?

I don’t have any insights here, but personally I think there is a different user base for files and talk and I don’t think those will be merged. There was some discussion about sharing credentials between the apps on GitHub (I guess that’s the reason to have the latest files app released under a new bundle id).

I’ve been using the Test app for a few days now and its been working like a charm so far.

Just installed Talk Testflight and will give it a try.

How can i start a poll. I use the beta Version

While in a chat tap the attachment symbol and select poll to start a new poll.

No poll option in my attachment 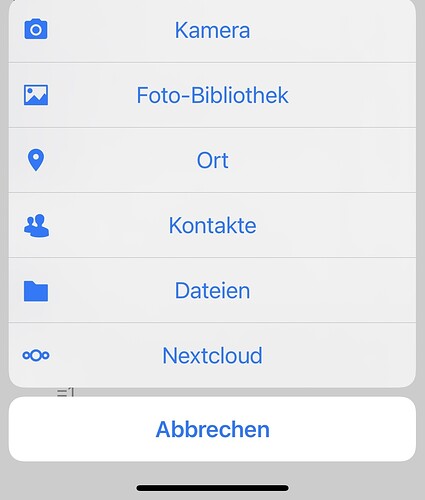