Awesome ways you can use the Splunk App for Nextcloud

When George Mallory, a mountaineer in the early 1920s was asked why he wanted to climb Mount Everest, he is supposed to have answered “Because it’s there”.

I was recently asked why I created a Splunk App for Nextcloud and, although I didn’t say it out loud, the real answer to that question is probably “Because the data to do it is there”.

I’m a Splunk Sales Engineer. As such it is my job to demonstrate and explain what Splunk is. Other than the fact that I thought building a Splunk App for Nextcloud would be a fun project, I was also curious about how my own home-based Nextcloud server was being used.

The app I’ve built can now show information such as:

For future versions I’m working on the app being able to answer questions such as: There is a wealth of information created by a Nextcloud system, the tricky bit is understanding what it all means and working out how to make use of it!

If you have heard about Splunk but otherwise have little or no experience with it, you may think it is just a log aggregation tool. But Splunk can work with any alphanumeric data, not just data from log files. Once data has been ingested, you can use Splunk to get all sorts of insights based on that data.

My Splunk App for Nextcloud journey started when Nextcloud introduced a monitoring API (go on, try it, as an admin in Nextcloud click on the letter (or picture) in the upper right corner of the Nextcloud UI. Click on Settings & Monitoring, scroll down to the very end where in the section External monitoring tool is the URL for your Nextcloud system. Copy and paste the URL shown into a browser address bar). The Monitoring app built into Nextcloud will give you information about your Nextcloud system here and now. It will for example tell you how many files are stored and administered by Nextcloud, but what did that number look like two days ago? A month ago? So I built a simple script that every 5 minutes pulls data via that monitoring API and feeds it to Splunk. Other than assigning a source type (a name by which you want to categorise certain data), that is all there was to it. Knowing a few Splunk commands (as an example enter this: sourcetype=nextcloud-serverinfo | timechart avg(“ocs.data.nextcloud.storage.num_files”) as “No. of files”) and you can get simple visualization such as this one:

That long name (ocs.data.nextcloud.storage.num_files) comes from the data as delivered by Nextcloud, the rest are normal Splunk commands. How many files might the Nextcloud server be storing 12 months from now? Easy, predict it with the predict command (assuming you have enough historical data to base the prediction on). 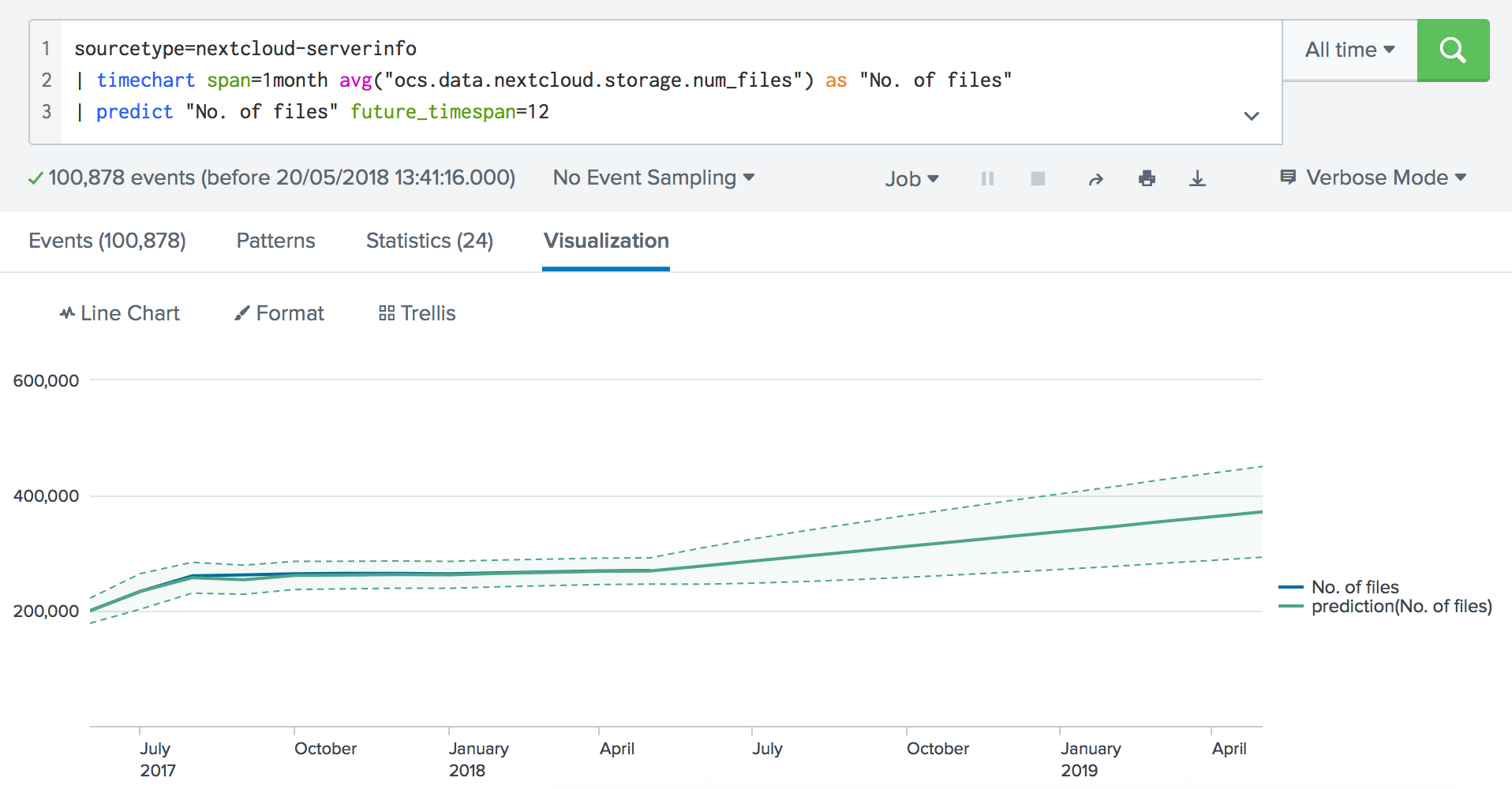 Know a few Splunk commands, and it becomes super easy to visualize and analyze your data.

I do this for a living, I have still been amazed at the insights I’ve had from Splunking my own Nextcloud installation. At Splunk we often speak about delivering ‘aha’ moments from machine data, and there are plenty of ‘aha’ moments to be had from the Nextcloud data.

You don’t have to learn commands such as those above to get insights into your Nextcloud data. Search and visualization definitions can be stored in dashboards, and dashboards can be stored in Apps, and Apps can be installed on a Splunk server without having to know how the App does what it does. I’ve already created that App ready for you to use. With my Splunk App for Nextcloud you can view dashboards such as this one without having to know a single Splunk command: 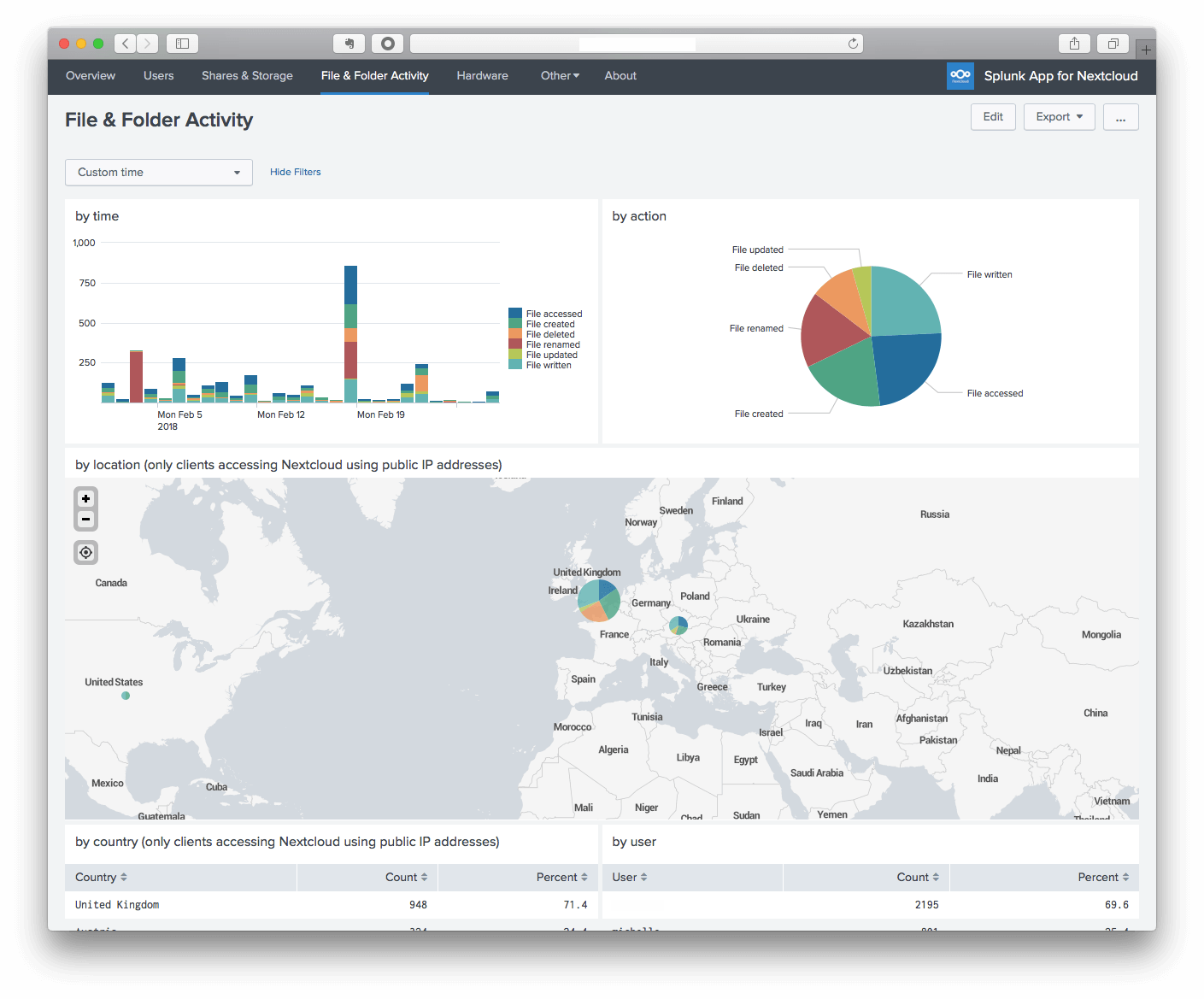 Assuming you would now like to analyze your Nextcloud data, what do you do? Splunk isn’t open source, there is however a free version available. For the first 60 days it has all the functionality of a licensed version of Splunk, but after those 60 days some features are disabled. The most important feature that disappears is probably authentication. There are other limitations, such as how much data Splunk will ingest per day. After one year, my Nextcloud server (with 4 active users) has generated 350 MB of log data. Splunk Free allows up to 500 MB to be ingested every day, so unless you have thousands of users, those 500 MB of data per day should be enough.

To give you an idea of the effort required to make use of the Splunk App for Nextcloud, I’ve outlined the basic steps required here.

Except for the patience step, I reckon the whole thing can be done in less than one hour:

I’m a Dane, now living near London. I’ve been in the IT industry since 1986. IT was just meant to be a temporary thing while I figured out what I really wanted to do. I ended up staying in the industry and it has been fun! It feels like I’ve done a bit of everything. That temporary job was supposed to be selling Commodore C64’s over the counter. My boss discovered I had taught myself programming, and I started developing small programs in Turbo Pascal for PC’s. A job change had me administrating an IBM S/36 minicomputer. A couple of jobs later and I was now a network support engineer. A few more job switches, and I had specialized in IT monitoring. Via an acquisition I ended up at IBM. I have now been at Splunk for three years where I lead a team of sales engineers.

In my spare time, sometimes I create Splunk apps (mostly for my own use, other than monitoring my Nextcloud server Splunk is also monitoring my solar panels and energy usage), but of course I also do non-Splunk things. The Splunk App for Nextcloud is a hobby project, and not an official Splunk project. In other words, don’t blame Splunk if it doesn’t perform how you believe it should. Things will get done as and when I’ve got the time and ideas.