Yes, without WLAN with Smarthome the site is accessible, thanks for the tip. What else can I do or check in the script on the server?

have you installed any apps so far?
if you’re trying to access the url via browser - is there any script-/ad-blocker active? if so: please deactivate… (it would only effect the direct connection)
do you have a dns-server of your own installed? try another one like 8.8.8.8 (google)

The DNS server of the Fritzbox is used. Nothing has been moved there. It was always working a few weeks ago, but not anymore a few days before. No apps were installed except the standard apps.

even no update and such?
was there any change from your provider?
have you tried rebooting your fritzbox/nc-instance, already?

What should now be changed here?

and
The Google Public DNS IPv6 addresses are as follows: 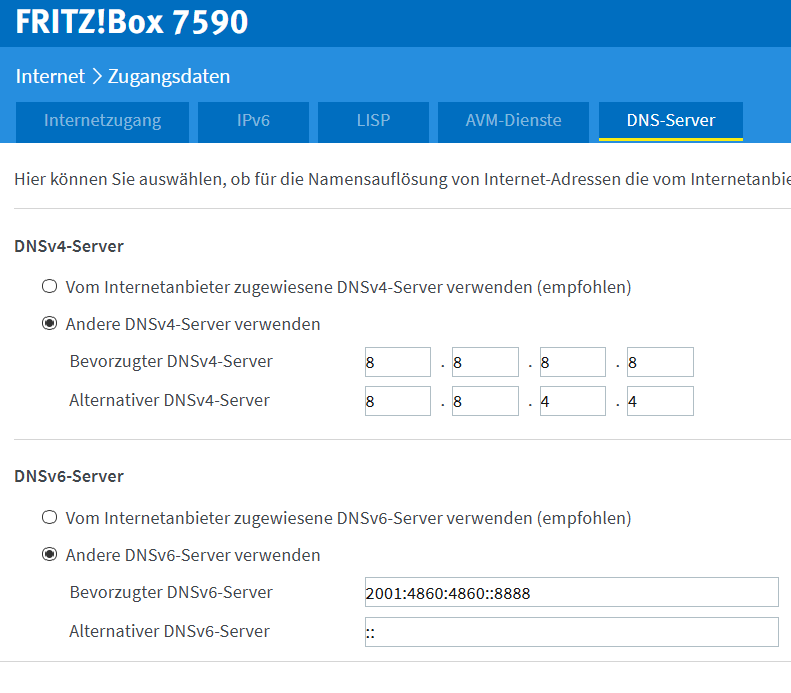 Fritzbox and restart the NC instance. Now it works again. Funny thing about that. I’ll just watch it. Thanks for the help.

I read this first because the Google DNS should be better anyway. I can test your wish tonight. Thanks

Same problem for me. I’ve already opened this topic: https://help.nextcloud.com/t/apps-nextcloud-com-down-only-for-me/76673

The app store is available when I am outside of my home network.
Does anyone now the “bantime” when I made too many requests?

then the problem with me will be the same. What nonsense. I have my server on a dedicated Raspberry at home. Why would they ban the AppStore I wish that Nextcloud would express itself, even if it is only the free community version.

Quite interessting. I just restarted my FritzBox and I am able to reach out to apps.nextcloud.com again. I don’t know what was wrong with my FritzBox…
But seems to be solved then for me. Thank you very much!

apparently it might have been a problem with your router and/or internetprovider. (maybe an internal change from ipv4 to ipv6 or something. but this is just looking into a chrystal ball)

that’s exactly how it seems to have been. the connection was no longer via IP4 but via rIP6. According to nslookup determined. I also took the DNS server from Google and rebooted the Nextcloud server. It’s been up and running ever since. Let’s see if the problem occurs again.

Now I can reach out to apps.nextcloud.com again. Definitely a FritzBox problem…

Edit:
Or maybe a Telekom problem as the previous FritzBox setting was “Retrieve DNS from ISP”.

But I can’t reach it…

I do not use Fritzbox DNS, but PI Hole instead.
I find out that http is working fine, but https drives to IPv6 Address that has some problems:

Flushing DNS cache does not help, between GET and answer is more than 9000 ms. 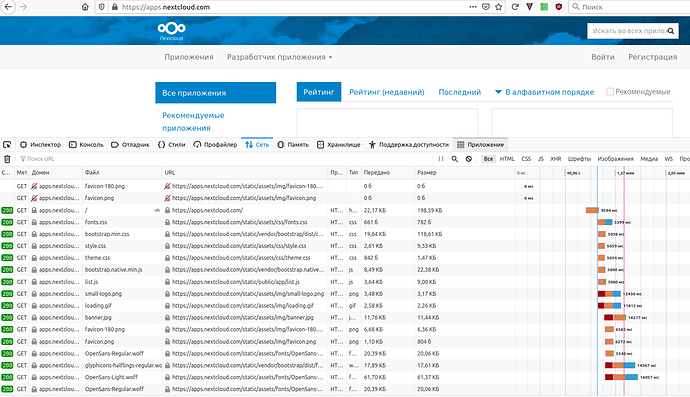 Speed test of Google also does not work well https://developers.google.com/speed/pagespeed/insights/?hl=de&url=https://apps.nextcloud.com

I am using telekom without fritzbox, and have the same issue. I cannot reach apps.nextcloud.com

I have the same problems …

I tried it via the data center, cellular network, VPN provider and and and …

Strangely, it’s been like that for a few days. At night it seems to work again.