Is there an Android version of the Audio Player app?

Or an extension to the offcial Android client for streaming audio files?

Nope, not at the very moment since the web simply does play the file

The Android client can’t really support this without exposing your credentials to other players via the URL.
Nc14 will shipp the ability of giving us an interface so we can implement streaming in a more secure way, so it’ll come in the future, rather end 2018 or in 2019.

I have an ampache instance which is kind of clunky and I’m looking to switch eventually.

Nice to hear that. For now the only native option is the Music app with Ampache support which works but is a bit clunky.

Edit:
Unfortunately not designed for tablets - can’t be installed

Don’t know if this is of any use, but I find that when I download music and audiobook files from my nextcloud to my phone, they appear in the Google Play Music app. I didn’t do anything to make this happen, the app just seems to find them.

I haven’t tried making playlists with these files. I have been tempted to recently when I hit an annoying problem with Google Play Music on-line, but I haven’t yet.

Also, the audiobook player I have settled on can be set to look at the nextcloud folder on my phone, so I can sync books I want to listen to and use that app to display and play them.

I read the description of CloudBeats. It does sound interesting.

Thank you for advice!

P.S. Are you sure about tablets? I just installed this application on the Lenovo TB-8704X, CloudBeats works perfectly.

P.S. Are you sure about tablets?

It does not appear in Google Play Store on Samsung Galaxy 12.2" Tablet 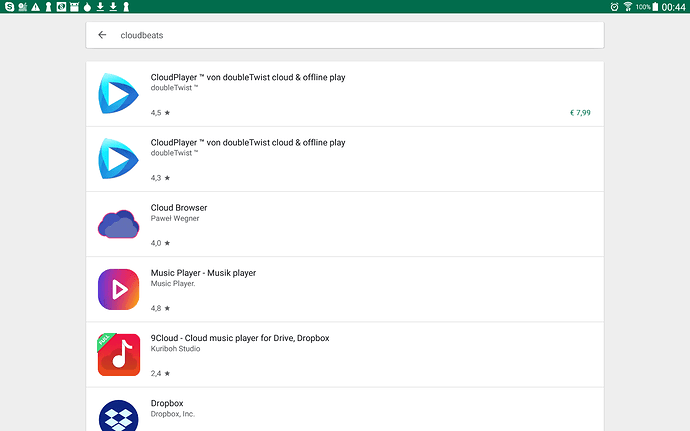 It does not appear in Google Play Store on Samsung Galaxy 12.2" Tablet

Hmm… It looks like CloudBeats is not available for some model of tablets. Oops…
Anyway, it’s a chance to solve this issue – install directly from apk-file.

Hello I would like to give a suggestion to you who have content such as music, movies on your Nextcloud server.
Here at home I use it in conjunction with the Plex media server and I can listen to my music and watch my videos on any Android and iOS device, and not to mention that in the music option it is possible to create playlists

in conjunction with the Plex media server

Meanwhile i have switched to Synology NAS with DS Audio for Android which is much more developed and also working from outside my network at home. I can definitely recommend it.

Kodi works well to stream video, audio and image slide shows directly from nextcloud to desktops and mobile devices. Streaming from nextcloud works out of the box via webdavs, but the interface is skinnable and handling of metadata is highly configurable. Album cover art etc can be auto scraped or manually set, playlists can be made, shared and managed. I can recommend it for daily use to give family members and friends who are not tech savvy access to media stored on a nextcloud server.