Is there a better way to do this so the files don’t get duplicated on the local machine that way?
So far, I found that I need to remove the default [user]\Nextcloud sync connection. Then, add a folder at the Nextcloud server user root location for each arbitrary folder Sync Connection.
So, this means I never sync the Nextcloud server root, but only the subfolders I create under that.

Is there another, better, more default way?

Could you show us a screenshot of the folder sync setup.
Are you running on windows or linux?

I don’t use the predefinid nextcloud folder at all and have multiple different folder syncs set up and everything is working as expected.

I understand how and why this is happening. The logic actually makes sense. But, I can’t help but think that there should be some sort of safeguard against this sort of behavior. 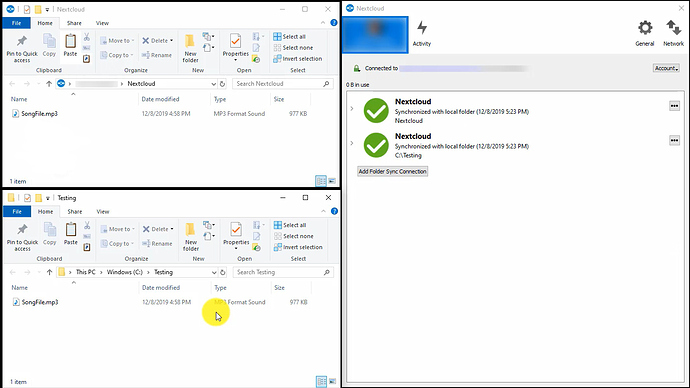 Also, here is a video file of the whole process:

Gofile is a free and anonymous file-sharing platform. You can store and share data of all types (files, images, music, videos etc...). There is no limit, you download at the maximum speed of your connection and everything is free.

Well, everything is working as expected for the configuration you showed us. The remote “nextcloud” folder is set up to be synced to two different directories and thats all the client does.

If you do not want anything to be synced to [user]\Nextcloud you need to remove the first sync connection.

I have encountered the same. The answer above is like: “This is expected behaviour”. I was expecting that the two sync connections would be independant from each other. How can I do so?
I do not want the files from one connection to be synced to a other one.
Also I appear to be able to do so without the need to enter any password for the second sync connection.

Okay, I found it. Do not go to settings, it will just show yoyu the currently active account.
I needed to add a (new) separate account: System tray - Nextcloud icon - Current account - Add
Quite normal. Although, IMHO, one could imagine that a button in the settings dialogue, next to the icon of the current account’s icon, would be handy/instructive.