About downloading APK file of Android app from site

Hello developers!
Please, add the opportunity to download APK file of Android app from site. Many open-source proponents don’t want to registrate the account in any service as Google, and there should be the alternative way to get the app.
I propose to make it like on my enclosed picture. It should be useful. 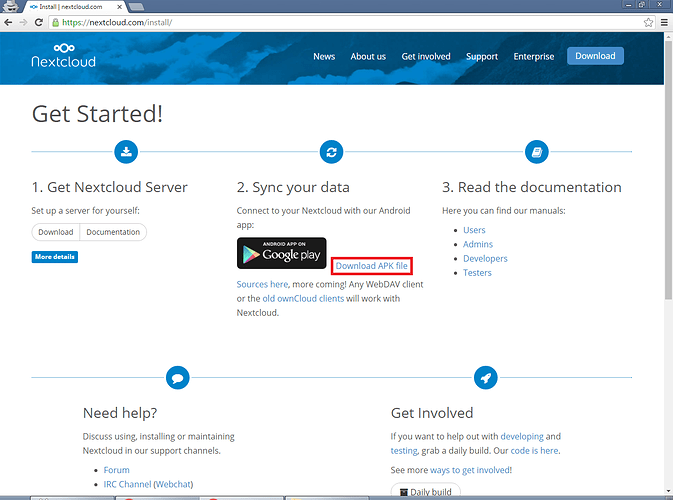 I guess there aren’t a lot of disadvantages of this for the more advances users. However note that there is the F-droid app store on Android. https://f-droid.org/ Currently there is only the Nextcloud beta app, but AFAIK the stable app should appear soon.

The stable release should appear within this week.

@LEDfan, yes, as you said, “for most advanced users”. But I talked about another ones, who are not so advanced and want just to download the app.
Yes, I know about F-droid, but it doesn’t release APKs from developers, only that are builded by themselves from sources. This is the additional security question (hypothetically, somebody from the service can add something wrong there). No, I don’t want to insult them, but I just talk about the way to get APK from official site without any mediators.
P.S. If you want to say something predictable about paranoia or “you have to build it yourself from sources”, let me be perfectly clear: I just talk about one more way to get the app. Very many developers release their Android apps not only in Google Play, but on their sites as APKs. It would be rational and comfortable to many different users.

I really agree that providing an APK is a simple and good to way to provide the app to users who don’t want or don’t have access to the play store. (E.g. some custom roms or if it’s blocked)

Nextcloud wants to have it’s software as easy to get ass possible. That’s why the android app is free (the ownCloud app wasn’t but was open-source though). See: Desktop & Mobile Apps

I get your point @Randy_Roach. This is something that needs to be decided by Nextcloud as in the company running the site. So cc @jospoortvliet @LukasReschke

@Andy if you are OK creating a new APK on every release (I guess you have to do that for Google anyhow) then we can put that on the download server and I can link to it on the download page, no problem at all…

@LukasReschke then has to think of a process, of course

and, as usual with that annoyingly pro-active guy

it is already on the download page, why did I even discuss this!?!?!

Now to add it to the install page.

Does it not make more sense to only offer Google Play and F-Droid? The raw .apk download offers no update procedure at all.

Does it not make more sense to only offer Google Play and F-Droid? The raw .apk download offers no update procedure at all.

This has been said on so many different entries…
Maybe we should include an automatic update mechanism for this use case?

What’s wrong with updating the fdroid version when the Google Play version is updated? Automatic updates for everyone, and we cover both the popular and privacy conscious bases.

We do exactly that, the apk download is basically there because f-droid doesn’t support release candidates

@Bugsbane None, the beta and the stable are released to f-droid. It is just not possible to publish release candidates to f-droid since f-droid doesn’t have proper support for release channels. So there won’t be RCs but stable and beta.
If you look at Google Play you can simply register as a tester for an app. Having done that a publisher (like us) can publish RCs which will come to your device and are technical interim releases between stable releases.
f-droid can’t really do this so in case we would publish a RC version it would be installed on all users devices, which is not what you want.

Hope that clears things up

OK, thanks for explaining that.