Unchecked folders will be REMOVED from your file system

Correct. It is running on Server 2008 R2. The sync completed successfully on Friday, so I came in this morning, and unchecked a folder that one of my AD users keeps his files in. This is shared from Server 2008 r2 server. After unchecking that folder and a few others, he told me that only 2 folders were visible. Upon checking I discovered that all but those 2 folders had been deleted from the server’s actual shared folder!

Note that when I attempted this with my Mac OS X client, it did what you would expect, removing the files from the Nextcloud Box and NOT from my local desktop. Not sure why the difference. When unchecking a folder in the sync app, it DOES say it’s going to delete local files, but I figured that was just a problem with the way the warning was worded. Now I see that it means what it says!

I just tested this again with another folder I didn’t care about. I watched as it ACTUALLY DELETED the files on my local system. Anyone in dev watching this?? How can I alert them of this situation? This makes this product a complete no go. No sync app should delete local files simply because I deselect the option to sync!!!

You can go to the github page, I believe this is the one you want:

I’m a bit confused about your situation however, as I haven’t had the Nextcloud desktop client delete files remotely. If I ever tell it to not sync a folder, it will delete the files on the local machine and they remain on the server.

Here is some more background on this topic from the client bugtracker:

If you want your Win-Server being considered as a server, you should perhaps use the external storage function. This way you can include storage from your windows server into the Nextcloud box (all data will remain on the Win-Server without being on the Nextcloud server. If a client connects through Nextcloud, Nextcloud has to fetch the data from your Win server). This comes perhaps closer to a solution you were looking for. 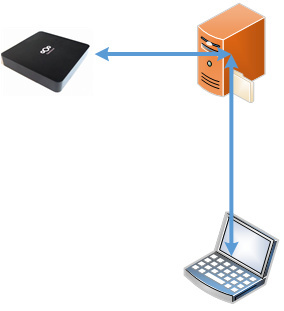 I don’t necessarily understand why you’d run it like this when you could push the client to endpoints directly, but that isn’t important here. What is important is the client works as intended, if you uncheck a folder on the client (which your Windows server is in this capacity) it will remove the files; you don’t want them synced, why should you have them wasting space on your client?

If OneDrive or Dropbox forced me to sync everything and didn’t allow me to uncheck what I didn’t want on my local machine, it’d be a pretty awful service.

If you do want them on the client, why do you uncheck the box? They’ll sync away forever between the NC box and the file server without question.

No sync app should delete local files simply because I deselect the option to sync!!!

Entirely disagree. That’s the point of removing the sync relationship; you don’t want to sync the files. If you wanted to do a one-time sync, do so to a staging folder and copy them over to their final destination. Guarantees remote Box files can’t be modified that way too.

Files that can be reproduced easily that take up a lot of space like ISO files do not need to be synced. Old user profile backups I may want to keep for a bit until I am sure the user has what they need, archives of old files that accounting doesn’t want to get rid of, but I know are of no use anymore, I can think of many reasons why I want the files accessible in my root share folder, but not taking up space on a cloud server.

I have reviewed several cloud systems. Absolutely none work the way NextCloud works. They can’t. No one would use them. No one would take the risk. There is a scenario where someone could uncheck a folder, delete the local files, not know what to do, and so delete the account on the nextcloud server, thereby permanently losing their files.

I am never going to convince developers there why this is such a bad idea, so I simply will not use this product. Thank you for you support in all this. I just wish it were made really clear before purchasing the Nextcloud Box and the Rasberry Pi that this was the case, but it wasn’t a very expensive experiment, and I was only testing to begin with.

Again thanks for all your assistance.

There is one thing: The sync client can ignore certain file types. So it doesn’t sync any of the ISO files but it doesn’t work on a folder basis.

There are two principal ways to do sync:

I had the same problem that I didn’t want to sync everything to the server. So I decided I keep my file structure and I add a sync folder. Then I only put data into the sync folder of projects I’m currently working on. Once they are finished, I move it back in my regular folder structure outside the sync client. It sounds a bit complicated but now it’s working quite good. On my mobile computer, I now have all files of current projects synced.

The first sync scheme is probably easier to implement in term of how to handle conflict files. So only need to do an initial sync and then you just keep track of the changes. In the second, there are some more questions: Do you keep the whole folder structure of the client, what if the folders are wide-spread over different disks. What if the folder structure between clients don’t match? If you exclude a folder from syncing and keep data, what do you do when you chose to sync it again. Should the client update the server’s folder or the other way round. What if files on both sides have changed?
Your wishes are not impossible but they require some work on how to implement this stuff. On a community project, you can help to find a suitable way (for some things you don’t need to be a programmer). If you can’t do it yourself, you can put a bounty on a specific issue:


or get an enterprise subscription.

You don’t have to get involved and you don’t have to pay, you can just decide not to use it or a different solution. At some point there will be perhaps a solution and you might reconsider to use Nextcloud.

This topic was automatically closed after 37 hours. New replies are no longer allowed.