when I use e.g. a public room and want to join with an iPad - I get only a black screen and no sound.
With Firefox and Safari. Are there special settings required on the iPad?

Perhaps missing rights on the iPad to camera an microphone?

Can you join from any other device inside or outside your LAN?

Okay … Must be an other issue.

Set up a turn server like you discussed here

But the first quick and dirty try … no success

Since it is not mentioned there: Did you remember forwarding port 8443, or the one you use for TURN server?

And what about Jasons question?

There was also one error with the TURN server protocol assigning mentioned here: Spreed app issue with setting "turnServerProtocols"
I think this still IS an error since the pull request was merged into version 1.2 which is not yet live? But I can’t say it this really leads to an inability of using a TURN server, or just to an error message. You could try to download the current master version from github and see if something changes.

I have the same issue on my 5th generation iPodTouch running iOS9. Videocalls work fine with our Android tablet but not with my iPodTouch (Videocalls are initiated on my macbook, Nextcloud is running on a VPS). I also get a black screen with Firefox on iOS that supposed to have Webrtc support on iOS while Safari does not

After clicking in the right upper corner on the name “Guest” - I get this screen. 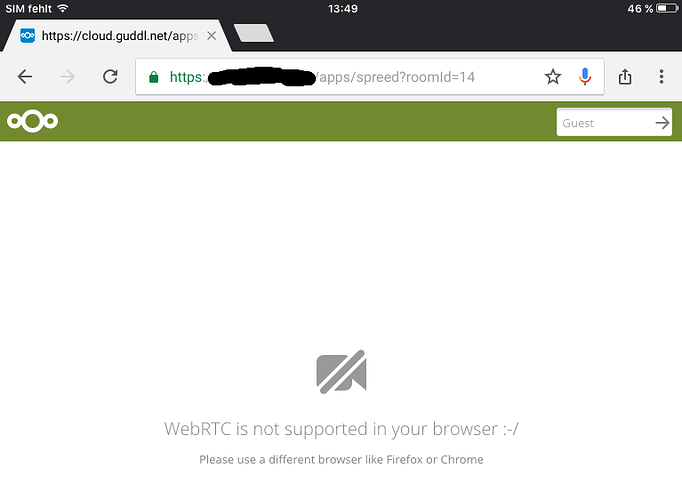 Can you join from any other device inside or outside your LAN?

Hmm, so it’s indeed an iOS specific (general or configuration specific) problem. Actually already mentioned in first post, but good to clarify that ;).

There is no issue related iOS on github so far. Did you already check if WebRTC works elsewhere with your iOS @guddl and @nomad?

For example here or better on another real WebRTC server or even Spreed.ME, the other solution with dedicated Spreed server and Spreed.ME Nextcloud app? Does the browser console show any hint?

As Chrome and Firefox with native WebRTC support also do not work (on these iOS clients), it is not browser related

Neither Chrome nor Firefox on iOS have support for WebRTC.
There’s a WebRTC-capable browser for iOS called Bowser, which however doesn’t really work.

So, solution for the moment => Does not work.

@guddl: Yeah often the problem with Apple but actually Google and mozilla should be blamed for not implementing WebRTC into their iOS browsers. On the other hand maybe Apple doesn’t make that task too easy for them…

Spreed doesn’t work on Firefox and Chrome on iOS devices yet because the WebRTC protocol for WebKit still is in development, see https://webkit.org/status/#specification-webrtc.

The trouble is that Nextcloud does not display an appropriate error message (see https://github.com/nextcloud/spreed/issues/154). If anyone with programming skills could contribute a pull request for this on GitHub he/she would be most welcome.