Some NextCloud Contacts "read only"

I sent emails through NextCloud mail and those addresses were added to NextCloud Contacts in a new category called “recently contacted.” Problem is, the contacts added to that are in read only and says I don’t have permission to edit them. I find it strange that as one of 2 admins that I would see not having permission on anything.

I’ve looked everywhere I could think of and searched for answers but still can’t find any mention of this. Is there a setting or something else I’ve missed along the way? 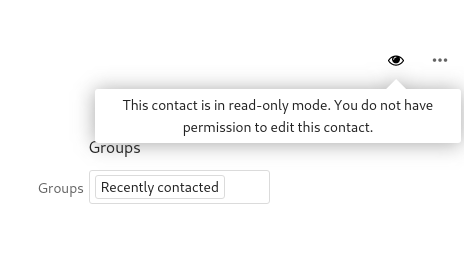 From what I know there is no such app called “recently contacted”. That is nonsense. No idea why somebody would write that as an answer. https://apps.nextcloud.com/?search=recently Maybe the user who answered refers to the app called “contacts interaction” which is system integrated. by Christoph Wurst AGPL-licensed Report a bug

“Collect data about user and contacts interactions and provide an address book for the data.”

Thank you for the reply. I’ll have a look and see if it’s been submitted as an issue or not. In the meantime, it looks like it’s probably safe to disable contacts interaction and see how that goes.

This topic was automatically closed 90 days after the last reply. New replies are no longer allowed.