It is time to prepare an update again! After a week of testing release candidates, we’re ready to unleash two updates with bugfixes and minor improvements to the Nextcloud community. Read on to find out what’s new, check the full changelog or grab the latest version now!

Nextcloud 12.0.3 delivers a lot of enhancements in various areas. With over 60 pull requests closed it has about 170 commits fixing small problems and bringing minor improvements all over.

The most notable improvements include:

A subset of the changes has been made available for Nextcloud 11 as well as part of Nextcloud 11.0.5. As we also made some security-relevant improvements we recommend you update your Nextcloud servers at your earliest convenience! See the changelog for details and download links.

We’d like to thank not only the contributors who helped make this release possible but also the many users who took time to test the release candidate and help us shake out any problems. Their contribution enables a much wider range of possible configurations and setups to be tested which cannot be done in an automated way. If you, despite all this, encounter any problems, please report it and consider joining our testing efforts next time to ensure your use case is taken into account!

10.x is now EOS then yes? It may have been dropped before but I didn’t notice.

How long should an upgrade from 12.0.2 to 12.0.3 on a fresh install with only one user usually take? I read that large installs can take several hours. I hit the upgrade button in the browser earlier, and now trying to log in it tells me I’m in maintenance mode. I’m going on almost three hours. I’m just curious if this is normal, or has something gone wrong upgrading. I’m running on a Raspberry Pi 2.

it should probably take only a few minutes given your hardware and fresh install environment.
check nextcloud documentation for how to finish the upgrade with the occ command and turn maintenance mode off afterwards.

First of all: thanks for all the hard work. Made the update using the updater on command line without any problems.

Is there any way to tell the updater which version to choose? In both, production and stable I get offered 11.0.5 as option to upgrade from my installed 11.0.4.

The update works quite ok, but the same error occured as I updated from 12.0.1 to 12.0.2:
“the update failed:
notifications: Failed to enable app notifications”

The app notifications is deactivated, as it was before the update.
I reported that issue before regarding update to 12.0.2

@jospoortvliet you mention email templates, but they’re still not editable in my 12.0.3.

What on earth has happened to them?

When will version 12.0.3 be available on the stable channel?

Does any of these NC releases finally offer smooth and clean migration from ownCloud 9.1.6? Without any “unofficial” workarounds, like ‘edit something in some .php file and it will work…’? 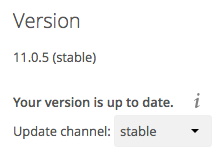 Any news on 12.0.3 on Stable or Production? I see contradicting message in the above responses.
Myself, I just got a notification that 11.0.5 is available in stable. Based on the message from ThomasMarx I switched to production, but same there. After updating to 11.0.5 there is still no sign of 12.03 in either Stable or Production.

NC 12 is being promoted for so long now, I am a bit disappointed it takes this long to show up in the internal NC updater. I can understand waiting for 12.0.1. But at one point you have to have confidence in your own product, and declare it stable… no?

Based on the message from ThomasMarx I switched to production

I was on Nextcloud 12.0.2 before the update. So I thought that this bug fix release is also offered to you, after you have updated to the latest 11.x version. Sorry for the wrong info.

as much as i would have @jospoortvliet commenting on this i already saw an entry at github where one of the dev said that they will most prolly update the manual in NC13 - which i understood as: no more mentioning of said subject.
but the same dev said in another posting that it would be possible to put everything into an app. it just sounded as if devs are waiting for someone trying this effort. not neccessarily devs/NC themselves.

Sadly I know nothing about the templates stuff

Now I just need to hope the coin drops with the right face up and I am in the first 50% batch!