NC 20: Too many incompatible apps: What to do?

in terms of unexpected behaviour, just have a look what’s going on with photos/album

Hi! The new Photo App (Gallery) is very bad… I have 20.000 Photos and 1000 Folders… When I open the Photo app, it shows me 20000 Photos without any possibility to sort them. When I look for the last photo (date), I must scroll down the whole day… And the worst is, that when I click on “Your Albums” it looks like my whole Apache crashes. After 10 Minutes it shows me all my 1000 Folders in color gray…and 10 Minutes later with thumbnails… Is there any possibility to fix it, short the photos …

Audio Player is available since yesterday by the way. I was busy finishing the conference video.
thank you…

Thank you @Rello and all the other developers that are putting so many hours in!

The updater shows a warning about apps which are not compatible.

Why did you proceed?

Because most people don’t use the internal updater. Depending on what OS you’re using, or whether you’re running a prepackaged version (e.g. NextcloudPi), updating doesn’t show any warning about incompatible apps. I use FreeBSD, and all my updating is done through ports, which tells me nothing about which NC apps will be disabled.

The scripts should be adapted to warn you before silently upgrading.

It’s got nothing to do with silently upgrading, the end user can be intentionally upgrading. The issue is that Nextcloud exists in a larger ecosystem, and it’s putting an unnecessary burden on community developers and maintainers.

There is [a warning that there might be incompatible apps] in the GUI, here is an example

This is the issue people are having. We’re all happy to have a rapid development pace, but it’s just not necessary to break compatibility with existing apps, especially ones that were working fine until yesterday.

Nextcloud needs to adopt semantic versioning, at least for internal APIs. What they call releases for marketing purposes can be orthogonal.

This appears to be the most reasonable approach. Nextcloud has been WAY better at managing it’s updates/upgrades than ownCloud ever did, and I have far fewer issues with upgrades than I used to. But that doesn’t mean it can’t be further improved!

Great, thanks a lot!

I use FreeBSD, and all my updating is done through ports, which tells me nothing about which NC apps will be disabled.

The FreeBSD ports are not maintained by Nextcloud. Talk about that issue with the port maintainer.

I guess it’s possible to expose the all apps are compatible via occ. Is there already an issue on GitHub?

The FreeBSD ports are not maintained by Nextcloud.

I didn’t say it was, I was explaining to somebody else why people upgrade without knowing what apps will break.

It’s possible to manage updates and upgrades better than they currently are.

Because most people don’t use the internal updater.

I question that. I for one use it and it works without problem except I get a warning and I have to activate the noncompatible apps manually from within the NC user interface.

I question that. I for one use it

But whatever. There are plenty of people in this very forum that also don’t, and have questions about disabled apps or when their upgrading goes awry.

How about I rephrase. There is a significantly large number of people that don’t use the internal updater.

I don’t think it changes my point at all. It also doesn’t change the fact that a lot of people unexpectedly lose apps while upgrading.

I’m answering directly to the question from threadtitle:
“What to do?”

It’s as easy: Nobody can force you to do something you don’t want to do… So best you can do is: waiting.
Yes, even if NC GmbH thinks it’s better to update immediately. It’s your own responsibilty doing it or not.

I don’t understand why some of you hijack this thread with the photos app topic again. It’s a completely different story. This topic was about apps that are disabled after upgrade because they are not updated yet. Gallery is not developed anymore and has been replaced by Photos which some of you (for good reasons of course) don’t like. But that’s something to discuss at: New Photo App in Nextcloud 18.

This is a solved problem. Semantic versioning along with strong respect for what the versions imply in regards to an API contract takes care of this. It’s not necessarily easy, and is definitely not free, but it can be done, and has been done by many other products.

I don’t think so. Now I’m not super technical, but if you followed the conference you might have seen that we just introduced versioned API’s for Javascript - my understanding is that until now, this was not guaranteed. And it will require changes in the apps to make it work, like bundling stuff JS libraries.

Here’s Christoph talking about that: 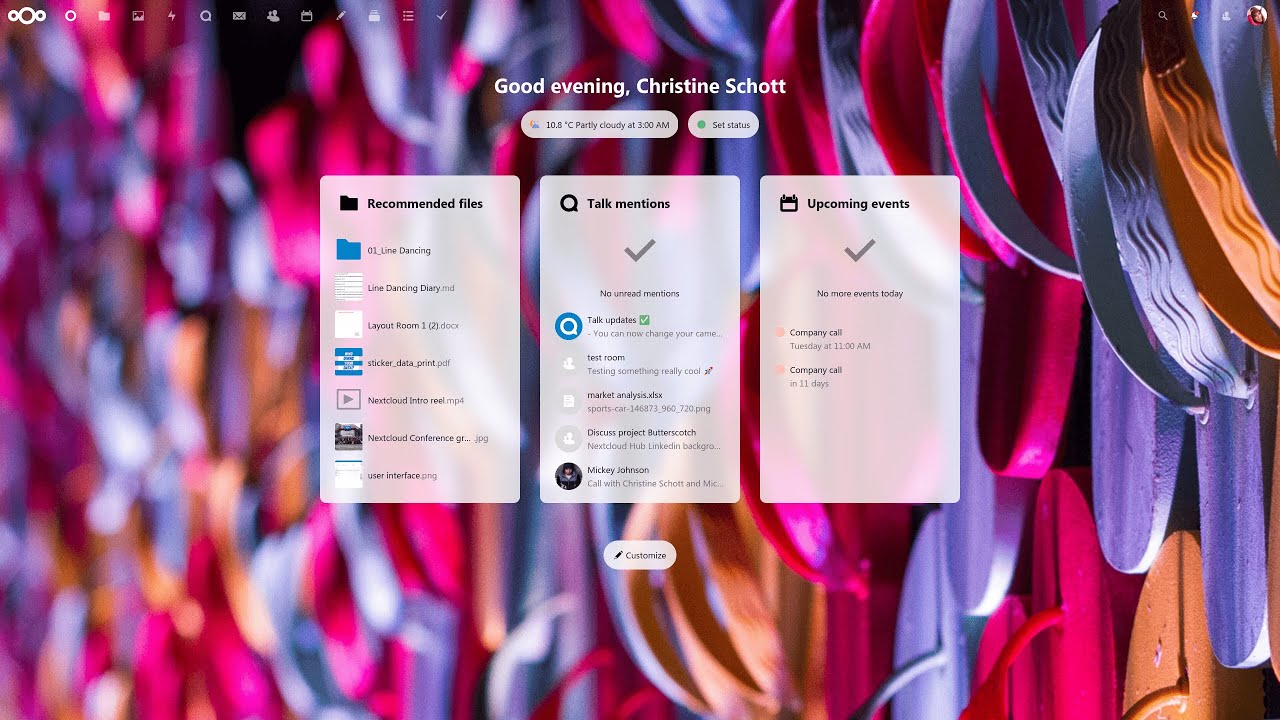 So yes, maybe in the future, we can make it so that apps will keep running.

On the general outdated-apps issue.

We can’t indeed expect all app authors to update their apps every 4 months. That is why we did the ‘enable untested app’ button - yes, it means after a major upgrade you have to click that a few times to get the untested/un-updated apps enabled, but that isn’t THAT much work, 3x a year… Enabling them automatically and potentially breaking systems seems a less than optimal solution.

With more stable API’s in the future, this issue will get smaller. But honestly, if this is your biggest issue with Nextcloud, having to click the red ‘untested app’ button, I think we did a fine job

Thank you for this enlightening comment.
This new development (API) sounds extremely promising and exciting for future interactions.
Beyond apps, I hope it will also empower admins to use it for new use cases…
It must have taken some guts to make the leap.
Considering this change I fear we might have to wait a little longer than usual to get all the available apps we hope for, before moving to production with NC20.
I’ve just switched to 19.0.4 in production, and for some reason I’m amazed by what seems like a big efficiency increase and responsiveness. Great. Really glad !
Can’t wait to move to NC20, but also very conscious and respectful of the necessary work from all the apps developers.
Thank you !

I rolled back to 1:21:00 to see the Moodle presentation. I’m blown away. I’ve run a fairly undiscovered Moodle site for a couple years now and had no idea how much cool stuff was coming next! Amazing. I think I went from a appreciative user/admin to a zealot by watching that.