Hey guys. There already exist discussions about that this module is outdated and has security vulnerabilities and should not be used anymore. I never found what exactly what it is used for in Nextcloud, but the warning only shows up when the theming app is enabled.

So simply disable the theming app (as long as you anyway go with default theme) and get rid of the warning.

Not sure about the hassle on the PHP version at it is clearly PHP7.3 as shown by php -v and on Nextcloud web UI. No need to check via phpinfo.php…
To install (if really required) the app try:
apt install php7.3-imagick

If that does not exist, then the source (whichever it was) where you installed PHP7.3 from does not ship this app, perhaps for a good reason

. Although Ondrej ships it for all PHP versions: https://launchpad.net/~ondrej/+archive/ubuntu/php/+index?batch=75&direction=backwards&memo=150&start=75

I have the same problem on my raspi. Updated to php 7.3 with this info: https://janw.me/2019/installing-php7-3-rapsberry-pi/

It’s not found on the buster repo. What’s the correct way to get this module for php7.3 on the raspi with buster repo?

If you do not want to follow my recommendation or you exactly know what you/Nextcloud needs this module for and you require this feature, then:

I run my NextCloud on Raspberry Pi, too. Indeed, the buster channel only provides imagick for php7.2 currently.

Disabling theming did the trick.

Faced the same issue and found this thread. Well, tbh I was just to lazy to check all that php version stuff… so as a Linux veteran (haha), I know that in most cases some support modules need the main application as well.
So I checked if the main app imagemagick was installed as a dependency of php-imagick and it wasn’t (weird somehow). Installed it, rebooted NextCloud, logged into the web interface again and voilà - works. Thumbs are now created by imagemagick, message has gone. No disabling of theming or anything - still theming is enabled here. Maybe that will help someone who finds this thread the way I did.

Just install those two with dependencies and you should be good to go:
sudo apt-get install imagemagick php-imagick 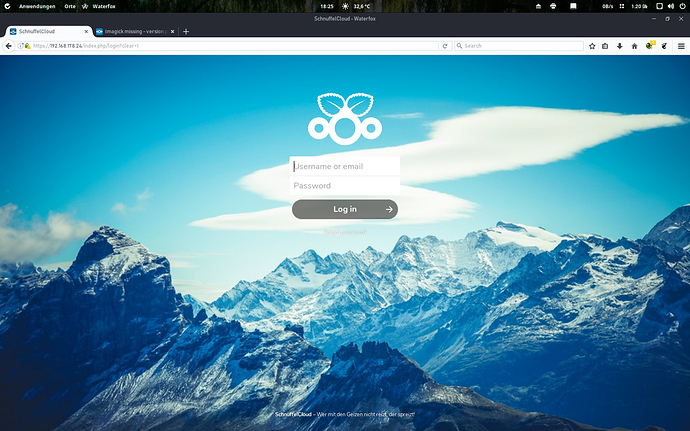 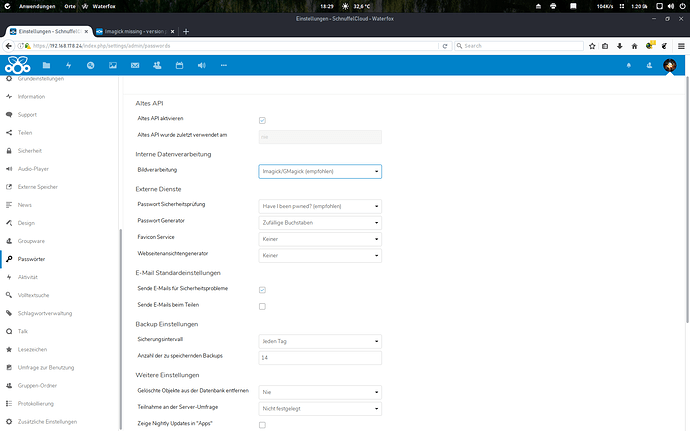 I’ve got the same problem after upgrded my server to Ubuntu 18.04.3. My Nextcloud instance use PHP 7.3 and I’ve already installed imagemagick php-imagick modules as suggested by @Captain_Jellyfish but it still doesn’t work. It seems that my PHP doesn’t load the magick module. I use Theming and I would like to fix it. Any suggestions?

You Sir, are a gentleman and you saved my day from a disaster! Thank you!!

I have debian (not raspbian) buster installed on a raspberry pi, and had the same issue with imagick module not loading in apache.

To solve this, what worked for me was to add the following in /etc/php/7.3/apache2/php.ini

Which triggered a php error “Module ‘imagick’ already loaded at Unknown#0”. To fix this, I had to comment out the following in /etc/php/7.3/apache2/conf.d/20-imagick.ini

You just saved me after 1 hour of research on this plugin, thank you!!

phpsysinfo() gives me allways information about the imagick module, with or without the extension entry in php.ini. So from that side everything seems allright.

You should consider this:

Don't use Imagick in server, and don't recommend it

A few days ago it was brought up to my attention that using Imagick could have very negative effects on security....

I read it. Without - hoppefully, from security view descript in nextcloud forum - because phpinfo() says other - imagemagick php module was gone.

The warning goes away with occ app:disable theming , descript as behind your hyperlink.

From my point, i like imagemagick. The server runs only in local network enviroment, and only known users have the permission to write. This gives me a good overview about security, I think. And so I think I have more negativ effects without imagemagick.

Hopefully the developer find a good solution to that.

Thank you, and bye!

Disabling Theming did the trick for me - Thanks!

Thanks, you save my day!

“To solve this, what worked for me was to add the following in /etc/php/7.3/apache2/php.ini”

after this I restart the server and it work like a harm.
NC V20.0.4

The problem is in newest php-imagisk version 8.0 updated with other modules.

My answer in another thread may be helpful here. Scroll down as needed to see it.

I had this same issue on NextcloudPi on the Odroid-HC2 with Nextcloud Version 21.

However, then I got an error complaining about lack of SVG support in imagick.
To fix this error, I used this thread: How to enable SVG for php-imagick and did the following:
sudo apt install libmagickcore-6.q16-6-extra

This solved the SVG issue.