Running NC19 as Docker on a Unraid Server, the upgrade to NC20 failed when trying to update the app “mail”. It then got stuck in maintance mode. 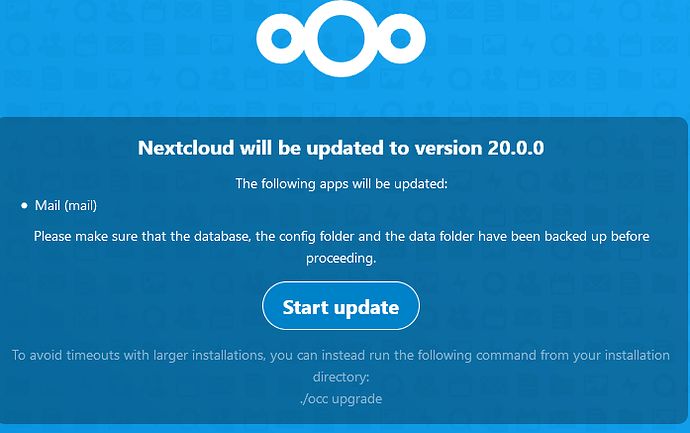 what should I do now?

Edit: I mistake the occ command to not work too.

Well, as the error message says, you are missing some php modules. In a normal linux environment you could just install them,e.g.

IMHO, you can either:

P.S. What strikes me as weird is also that it is only now complaining about the XML package. AFAIK it was already required by Nextcloud 19.

I could not find out how to install these modules within the docker environment.

I got “forced” to update to NC20 after my docker (auto-) updated the image.

What is the source of the docker image? Something official/reputable? IMHO it is faulty if it is missing required packages.

Nextcloud based on the official docker hub image. Nextcloud 18.0.X with full ONLYOFFICE integration. Based on: https://hub.docker.com/_/nextcloud/ Tag 18.0.X apache (latest) Please make shure you got the volume mounting correct. Please note you can...

I am not familiar with unraid, but the thread you linked specifically says “Nextcloud 18”. I don’t think this image is meant for Nextcloud 20.

thread description was not updated. It’s more for the template I think since it is the official docker image.

I reverted back to a backup with a empty data path and the upgrade was now successful, but not flawless.
After updating the docker image, the log showed the following:

but stuck then at 1 cpu core 100%. I did let it run for 2 hours just to be sure but nothing happened. The webinterface was not working.

I restarted the docker and then the webinterface was showing the upgrade page.

After I switched back to my real data path, it did want to update mail (and this time also notes) again as seen above. I removed the appdata_xxxxx folder in the data dir and NC20 is finally running.

I tried to use the old database with this install but it gets a internal error. There must have happened something to it. So what I am missing now is a day of file uploads.