Updated to Nextcloud 14 by accident?

It doesn’t seem like that big a deal but I accidentally updated to Nextcloud 14.03 from 13.06.

I got a message saying I needed to update my version of 13.07 but then when it finished the update I was on 14.03! How did that happen? Did I misread something? If so then I think perhaps the update message on that should be a bit bigger.

It means some of my apps don’t work anymore, but that’s not too big a deal. Everything else went smoothly. But I’m curious how/why this happened?

When you use stable branch it will update to NC 14 even it first let you know there’s update to 13.0.7. When it starts download, then there’s info it will download 14.
You have to use production line and you’ll stay at 13.

Well, when I started update process I thought it will update to 13.0.7 because there’s notice ‘update 13.0.7 available’. But when it asks to continue and start downloading, there’s notice it will download 14.0.3.

I almost updated to 14 also…

Okay sorry I didn’t understand your message quite. Apologies. I think the notice for it updating to 14 could possibly be a little bit more apparent. I know this is a case of “user error” but I generally think the best software is ones which don’t assume too much of their users. It says it’s upgrading to 13.07 but then asks you to continue to 14.03, that’s a little bit confusing I think. It would be like if you went to a McDonald’s and said you wanted a small drink and the waiter asked if you wanted to confirm getting a large drink and combo meal. (I don’t know well that simile translates to Germany haha)

All that said nothing bad really came of it and I would have probably wanted to upgrade to 14.03 anyway if I knew it wasn’t going to break anything (it hasn’t yet, except for a couple of small apps that weren’t really a big deal)

No problem. I know it wasn’t a good answer.

I agree with you. That is confusing. It should not change target version after the update have started.

guys… this is solved… plus: there’s already an issue filed about this behaviour at github since it really isn’t much apparent that you’re expecting updating to 13.0.7 and ending up in 14.0.3

Hey bud, that’s fair, but we were just having a conversation.

ya. that got apparent

Not really sure why this attitude is necessary or called for.

Human communication isn’t always efficient, especially cross culturally or cross lingual. Once the issue had been resolved I gave feedback for why I thought there was still a design problem and MeiRos merely responded with their affirmation.

If you had wanted to put a capper on that discussion linking the github issue you mentioned might have been helpful, but merely being surly doesn’t actually help anyone.

it’s so nice that you have fun here at the forum. really.

and of course it’s great if it would go cross culture and cross language. but this is a technical forum. for solving technical problems. if we would and could keep that in mind as a major point, it would be great.
there simply is no ‘attitude’ involved here.
the thread was solved by answer#2.

so why not going on chitchatting in private? that’s the beste place and communication-tool for such things.

Yes, this is a technical forum, and until you started griping the conversation was purely focused on technical issues.

The first response that I received was unclear to me so I asked further questions to make sure that I fully understood.

When I received a clarification I thanked the person who gave me that information and shared an opinion on how I think the design issue for the situation would be better handled. 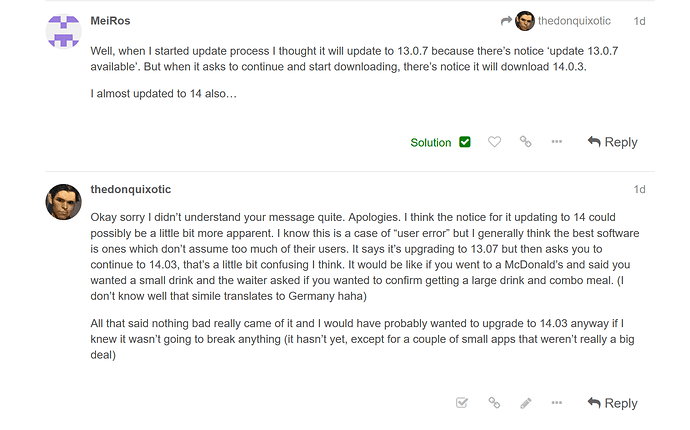 There’s nothing in our responses that isn’t focused on the technical issue at hand. If the thing that offends you is that I shared a criticism of how the product UX worked, then you might not need to be working in software development.

sorry, mate. i’m not going to discuss that matter any further. i have already pointed out what was neccessary… and that’s it.

feel free to do whatever you want. go ahead

Right, and the most unnecessary extension of the issue would have been done many messages ago if you hadn’t felt the need to be a jerk.