Hi
I’m running NC 19.0.5 on stable channel with the Docker installed on a Raspbian Buster.
I got this morning through the NC windows client a notification that 19.0.6 was delivered, so I went to the admin overview, and indeed I’m seeing (soory in French but easily understandable in the context) 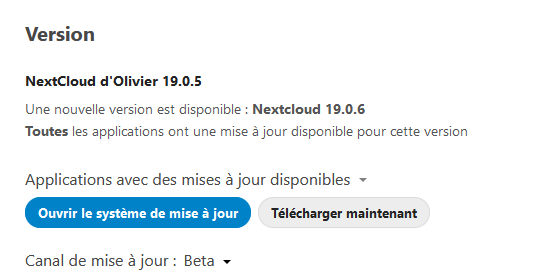 But when I try to do the update whether through the UI or though the CLI, it tells me the 19.0.5 version is up-to-date and there is nothing to do: 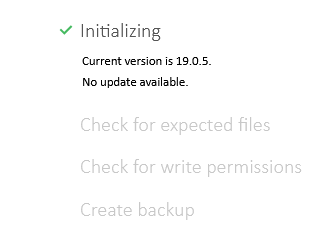 I first tried with the stable channel, and it didn’t work so I tried with the beta channel, but not working better (and even weirder, It should show some 20.X version in this channel)…

The docker image update doesn’t update the nextcloud version itself as far as I know. Nextcloud is in a separate volume.
Usually, I have to update manually.

FYI, several hours later, I still get the same error.

The docker image update doesn’t update the nextcloud version itself as far as I know. Nextcloud is in a separate volume.

This is precisely what Docker does do.

Hi @just
Sorry but precisely this does not work like you say:
I’m using the https://hub.docker.com/r/linuxserver/nextcloud image, and the documentation says:

In order to update nextcloud version, you have two options, firstly make sure you are using the latest docker image,then either

I update my images daily automatically with “docker-compose up -d” since months and it works pretty well.

Anyway, this morning I had again the message that 19.0.6 version was delivered AND I was able to do the update.

So, issue closed but still I do not understand what happened…

yes. you are right. that one is different from the “official” nextcloud image.