Hi. I have a Ubuntu client (version 2.5.1git) that keeps crashing.

When I launch after it crashes, it always says “You have been logged out” and wants me to log in again and again.

It does the same behavior if I rebooted the machine as well.

How do/can I troubleshoot this?

What are your server specs?
And check your levels via top command or Glances if there is something eating up the MEM or CPU

Back to your issue, I would have to guess that your server is not able to handle things, so its crashing…
There are few changes you can do to fix it, but first we need to know what is eating up your CPU.
Check in top for anything that is using a high number in %CPU or %MEM and tell me the Command that is using it.
Keep monitoring for few mins, or better until it crashes at that point we will know is the issue is from the server and what it is.

ah, this time it decided to show me its glorious detail… 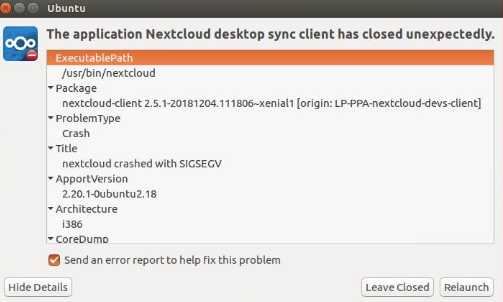 …and what’s frustrating? it tells me that I’ve been logged out and asks me to log in every…single…time…

I had the same problem,
My client nextcloud has to sync 1,3To to the server.
The problem was fixed by adding more RAM in this Ubuntu desktop.
I had 4Go, now i have 8Go but no longer crashes.

Yes keep us in touch

it just crashed again, but this time, it didn’t show the “The application Nextcloud desktop sync client has closed unexpectedly.” diaglog box, just an empty desktop…

the VM’s memory has been boosted to 10GB…still crashes…

Any thoughts/suggestions is greatly appreciated!

There should be a

If not do a

thanks for the response.

Finally! I have one Ubuntu VM with 20GB of memory, another one with 16GB. The client doesn’t crash any more.

A rather “thick” app, I thought.

You should try the 2.3.3 version that is more robust. I have a 2TB sync on it and it sucks only 3GB of RAM.