The one running 19, its mysqld slowly fills swap, as does cron – but at a much slower pace. Swap never seems to flush and there’s plenty of memory. Swappiness = 10

The one running 18 has identical configs to the one running 19. (At least I think they do but something must be different). It does not, or has yet had any reason to, touch swap.

The only other difference is that the database on the 19 (the one slowly filling swap inexplicably) is maybe twice as big as the other one. But we’re talking ~200MB to ~100MB.

The mariadb configs are identical – unless I’m missing something, and I’m convinced I must be.

If anyone has any clue or needs any more details to understand this issue, I’m happy to oblige.

As an update, over the past day, now every php-fpm process that exists is storing in swap, and more. But only on the one machine shows this issue. A screenshot of top running simultaneously on the two machines to illustrate: 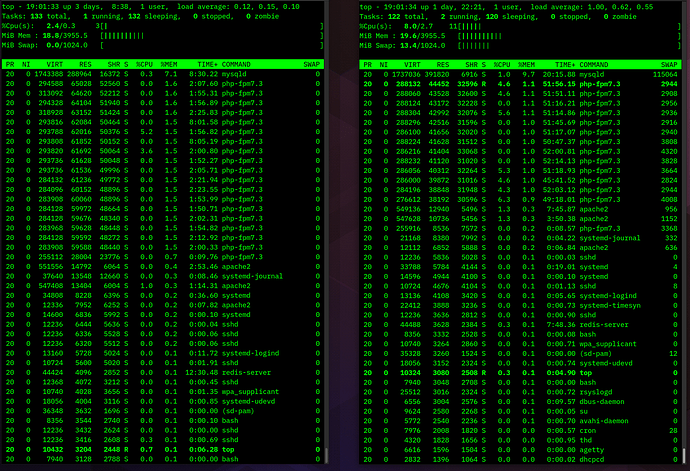 I’m going to advise that this be ignored unless somebody has an interesting thought. I’m finding it inconsistent enough of a problem that I’ve decided that running a cron job nightly, restarting the dphys-swapfile service, flushes out the swap and shouldn’t create issues as long as enough RAM is free to handle what is in swap, and this will likely always be the case.