I have NextCloud installed as a jail in TrueNAS. I just noticed that the root of NextCloud has 3+ TB is data consumed. I don’t store any of my data in the application but rather in external storage in a separate dataset. Does anyone know what could be consuming all that space? I only have just over 1TB of data in the external storage. 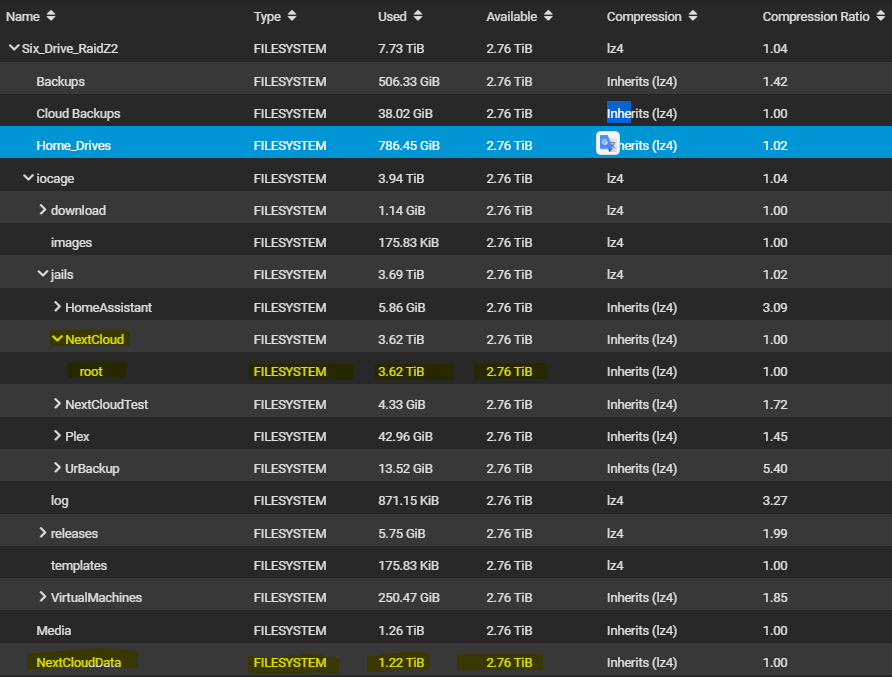 Just a wild guess as I’ve had a similar issue with another plugin: snapshots?
On every update trueness will by default take a snapshot of your jails.

Is it possibly the SQL database that could be consuming so much space. I’m close to having to turn off the nextcloud server until I can figure out what is going on, and I really don’t want to have to do this as this is how we backup all call recordings and pictures taken on our phones when on WiFi and charging.

On normal Nextcloud installations there are backups with each upgrade.

Perhaps you find some in

If it is not the snapshots… then what if you look around in a shell .../Nextcloud/root with du -h ?

(I think if configured in the right way, then the nc-backups land in the data-folder as well - as @devnull wrote)

So the du -h helped me alot. I was able to traverse the file structure after I added some more switches to help view the data. I ended up using du -c -h -d 1 /user to slowly follow the biggest folder (2tb) and found that some how my wives phone wrote 2tbs of files to the jail instead of the external storage. Removed them with the command rm -rf * and deleted everything in the uploads folder where there isn’t supposed to be any data.

Thanks for the pointers! Helped get me down the right path!

You can also install the program ncdu.
Then you can “surf” through the biggest directorys.