Are there any third party cloud backup solutions/providers that can backup a hosted nextcloud?

Hi Jason,
if you have access to your nextcloud via ssh, why not write a dump of the Database in a folder and then backup the complete nextcloud via tar archive (data and config.php included).
This sh script run via cron every X days and download it afterwords to your local computer.

Another solution might be just using rsync (if possible).

If you just have PHP Access, there are DB Backup solutions like MySQLDumper (http://www.mysqldumper.net/) for the database and some PHP Script to archive the data folder beside the config.php like http://stackoverflow.com/questions/2218111/php-recursive-backup-script

The best solution would be if the hosted provider has it’s own backup solution ready for you with one click.

No, I don’t have access via ssh and I don’t really want such access as I want the server to be completely managed, so that I can blame whatever happens on the hosting provider, if something happens.

If the hosting provider has a backup solution, I wouldn’t call that a god damn backup.

This is a good question.
I’m a hosters, and I have two offers:

On the full Nextcloud, it is easy, I actually do backups (every 4 hours) to a different server, with mysql dump included.

I have an http endpoint for their user to download when they want with the full, latest backup.

On the managed Nextcloud, I also do backups. But I don’t think I’ll ever roll back. Indeed, I can’t backup/restore a single user.

I could give you such http endpoint, but I could just put your data, not things that are stored in database

Could you specify a bit more your use case and see if I could full fill it?

Ok, first of all, I’m new here and I don’t understand why I don’t find this topic in the forum. Do you see it?

Secondly, I’m not sure what you are saying.

My case is this:

I’m an MSP, so I provide the cloud to my clients via a hosted managed file cloud and of course I need a backup from a third party, so that if you go down, like totally wiped off the face of the earth, I need to be able to restore the data.

I’d rather find a third party cloud that was always sync’ed, but I guess these geniuses didn’t think of that.

So, second best would be able to sign up to a third party, who could just do incremental backups of the entire cloud (if not, then just the dataset)

Ok, first of all, I’m new here and I don’t understand why I don’t find this topic in the forum. Do you see it?

What do you mean, I don’t understand.

I’d rather find a third party cloud that was always sync’ed, but I guess these geniuses didn’t think of that.

Ok, I understand better. You are a cloud provider needing to backup to a third party.
I actually have something for you.
It is a script in docker that push incremental and encrypted backup to a remote location.
I could be your remote location if you want.
How much Gigs do you need?

Look at this video; it shows me at the first page of the forum, but I don’t see my thread called “Third Party Backup”. Do you see it? Am I supposed to look elsewhere for it?

Secondly, you say you have a script that does what? It pushes incremental changes from what? I told you I have a hosted cloud solution and I don’t have access to the file system. How can I run this script then?

Also, I don’t want to run a script myself, even if I had access. That’s why I said in the original post: “Are there any third party cloud backup solutions/providers that can backup a hosted nextcloud?”. I want a third party web interface that let’s me point it to my hosted cloud server and do the backup. That means I don’t have to worry about running any script.

About the forum, I don’t know.

About the backup. I understand better, but still have questions.
(I’m interested because I plan to offer backup service for Nextcloud box for instance).

Do you run a full Nextcloud instance, or do you have just one account? (Can you install apps for instance)
Do you need backup just for files, or also for all you apps (calendar, contacts…).
Your provider doesn’t guanrantee you that his service is backed up?

And then, a bit of theory about backup. There is 2 purposes:

Which of this use case do you want to address? (maybe both).

And finally, what and where do you sync with your Nextcloud?
(For instance, do you sync your computer with Nextcloud? In this case, the disaster shouldn’t be much of a worry for you?)

Hope these questions will help us understand your needs

I just have an account and I can’t install apps.

Preferably, I’d like to backup everything, including apps, calendar, contacts, etc.

Sure, the provider does take backups, but from my stand point, it’s not really a backup; it’s a backup for them.

I want both possible solution, being able to restore the server in a new environment, for example a new provider and at the same time being able to extract single files or directories in case of unexpected events at user end.

Well, what I sync is not important; it’s my users who syncs with all kinds of devices.

You didn’t put a category and these posts seem not to be considered in the overview (unfortunately we missed some questions).

To make a full backup, you need to save the database-dump, the config/config.php and the data/-directory (you can include all the nextcloud code as well).

Sounds interesting. I think an easy-to-install app from the nextcloud app store that will take encrypted backups automatically and upload them to a remote location would be awesome. I could see myself paying a monthly fee for this service. Is that what you were planning?

Yes this would be the plan, but it is among another dozens nice idea to implement

And I guess, IndieHosters would have troubles offering a competitive price against providers such as hubic…

So not sure it is worth the effort for us. But yes, agreed, this would be nice

I hope you don’t mind me asking: Was your plan to offer that only for your own IndieHosters Nextcloud customers or to anyone who runs Nextcloud?

Had a quick look at Hubic (OVH) as well. Do they offer something similar already or why the comparison?

I believe that self hosting is the long term goal.
IndieHosters is a temporary workaround as it is still difficult for most people.
One of the pain, is backup for instance.

So yes, one of the goal of IndieHosters would be to help people self host in the future.
And this would go though offering services around self hosting. Backup could be one of them.

And we could help people backup Nextcloud or yunohost.

And so the way to solve it, would be first to implement an app for Nextcloud to allow easy third party backup. The backend for such a plugin would be, I believe, s3, ftp, webdav, borg server…
Once this app is developped, people would be free to choose among backup providers.
And among backup/storage providers, it is difficult to compete against such actors as Hubic.

Hope I made my view clearer, let me know what you think

Is there nothing happening with this?

How are we supposed to backup a NextCloud instance hosted by a third party?

I rent a NextCloud server with a company and I have absolutely no way to backup it. This is so terrible that I think I just have to look somewhere else for storage. What do I do if this host vanishes into a black hole?

If I understand this correctly:

Essentially all you have is a username and an interface to store things on a server you don’t control.

I rent a NextCloud server with a company and I have absolutely no way to backup it.

Sure you do. Download the files as a zip occasionally. For both calendar and contacts there are download icons next to the calendar/contact list name respectively: 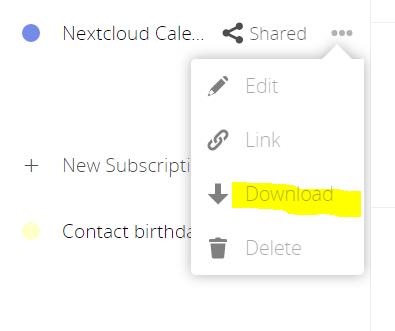 You’re not going to get database backups as it’s one database for all users. But other than the database options are provided for you to take backups as frequently as you want.

This is so terrible that I think I just have to look somewhere else for storage.

You’ll likely find you have the same problem with many solutions. If you’re not given the correct level of access to the server you can’t back it up. This is why providers do their own backups (and some can do custom backups of your data on request)

What do I do if this host vanishes into a black hole?

Find another or host NC yourself.

Well, I have 100 users with 5Tio data, so I can’t exactly download a zip file.

I just have an account and I can’t install apps.

There is no other way - you need either SSH access to the server, sacrifice your entirely managed status for one you help maintain, or work with the server provider to run a script dumping all data and databases to a location of your choosing.

If you’d like backups to be possible from within the NC console in the future you’ll have to:

In any case you can submit a feature request here: https://github.com/nextcloud/server/issues

is the API even there?

You can’t request the current database over the API?

You can’t impersonate other accounts, via the admin login, to fetch any file for any account over the API?

Ok, I understand better. You are a cloud provider needing to backup to a third party.I actually have something for you.It is a script in docker that push incremental and encrypted backup to a remote location.I could be your remote location if you want.

Can you provide us your script / docker image?