Hi there
Yesterday I came to 15.0.5 : everything was fine but some lists names disappeared … some kind of id instead of names as you can see below on the image.
any idea about how to fix it ? (other than renaming … ) 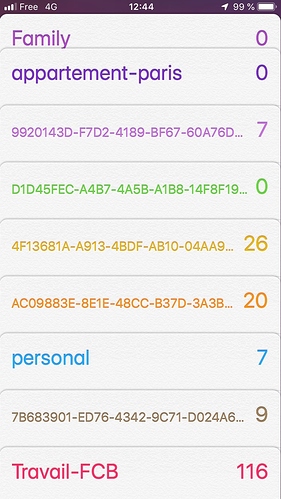 Are the tasks correctly displayed in the web gui? Have you tried to use a different task/sync app on your mobile phone? Based on the names of the readable tasks I assume that you are french. Would it be possible that there have been french accents in the tasks names, it could be possible that your sync app had problems with it?
I’m personally using DAVx5 and the recommended task app without having seen the described problem yet.

No , they are displaying the same way
for the french accent , I guess yes , not sure : i don’t really remember what was writing, I do not notice when I’m writing é, è, ê, ç ù …

thanks a lot … and something to remember “just use simple letters !!!” for french and … every language who uses accents and others

++ sync onto a iPhone : everything’s fine but that …

I know, the German language has these nice little Umlauts like äöüß, which are causing
similar problems from time to time too