I’m referring to this beta feedback:

I have several accounts with profile photos. Only for the account with a space in the username, the profile photo is not shown in the app. It’s shown on the web. The same photo is shown in a test account (without whitespace in its user name) when I upload the identical file. 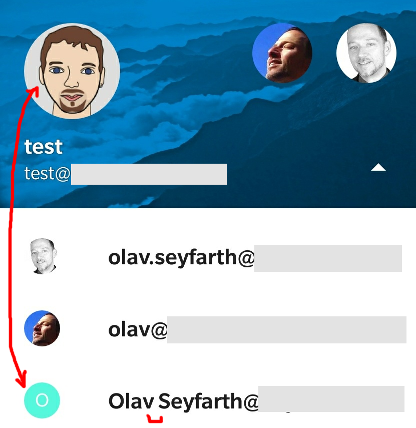 Here’s the profile pic to test whether you can reproduce this. I tried the current release and beta (RC9).

@nursoda i never saw an email-name with a “blank”/specialcharacter. i don’t know if that’s allowed, in general. maybe you wanna use underscore “_” instead?

Those aren’t E-Mail-Adresses but USER@SERVER compounds. The USER name is “Olav Seyfarth”, so “maidenname surname” here - and works fine for all web and DAV services.

@nursoda would you mind opening a issue in the tracker: https://github.com/nextcloud/android/issues
MY guess would be that the whitespace doesn’t get escaped when retrieving the image from the server so the avatar won’t be found and thus shows the cirlce with the letter…

Sweet! I already pinged @tobiasKaminsky about it.