I would like to show a use case here that may not quite match the standard use case for Nextcloud, but may be of interest to others. It will therefore not exclusively praise, but also contains one or the other suggestion.
First, a few words about me and the project: I myself have been using Nextcloud, or OwnCloud before that, privately for many years and am still very satisfied with it.

For some time now, I have been involved in a citizens’ initiative, to which I initially made part of my cloud available as simple file storage. As ‘Talk’ progressed, the idea came up to use Nextcloud as a single platform for the initiative’s communication. So far we had a separate forum software, an email client and ‘my’ cloud.

Since most of the members of the initiative do not have much to do with IT, a single and simple platform is appropriate. Already the forum software was too cumbersome for many.
So simplicity is absolutely necessary here!
Therefore I tried to set up a Nextcloud instance that would be simple and straightforward for most members to use, while still giving us the ability to manage tasks, use a shared calendar, edit documents, and some more for the members who do the organizing.

I use groups in user management many purposes, because it is good to roughly control the availability of apps for use.

e-Mail:
Some members maintain email addresses for the initiative. They are assigned to a group and the email app is only visible for members of this group.

We have several topic groups dealing with different topics, so we would like to have separate areas for those groups and a central area that is accessible to all. Every topic group is a user group as well.
It should be quickly apparent to users which forum or folder they should send their information to.
I add a group in the user management for each of the topic groups and use the

Group Folders app to add a shared folder for each topic group.

Since Talk and Files are the two applications that most members are interested in, that’s where I started.

Unfotunately the styling options for both folders and threads are actually non-existent, so this is the first place where I’ve had to use a custom theme / custom stylesheets to add colors or icons: 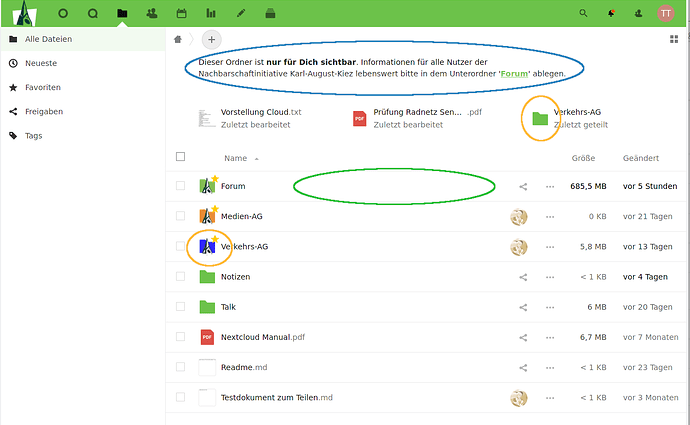 The drawback here is, that the stylesheet only matches the folder in the folder-list. The folder in the “What has changes last” category has a complete different selector so there is no chance to give them both the same look. (Yellow circles)
Another problem was to have a fixed text on the top of the current folder (blue ellipse). When a new user is added, the text is copied with the skeleton mechanism – but even the file is read only in the skeleton directory, it is copied with write access to the users directory. So I added a cron job to make it read only…
Another nice feature would be to have the possibility to add persistent information in the area which I marked with a green ellipse. Something like ‘Please add files accessible for all users in this folder’ would help a lot.
Ideas:
• It would be great to have the possibility to add special icons and / or colors to folders.
• It would be great to have the possibility to add persistent information to folders, which are displayed on the left of the folder name. 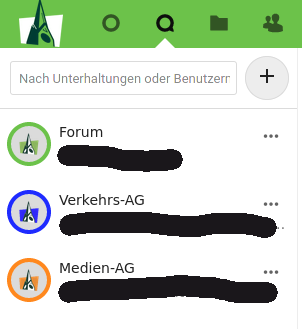 I use the same colors – but slightly different Icons – here. Finding the right css selector was a bit of a challenge.
Another problem is to add all users from a special group to a channel. It can be done once, but if a new user is created with the same group, it has to be added manually.
As we would like to use only one channel for each topic group, allowing answers inside a thread would be nice.
The next point that does not make sense for this use case: Talk always shows the channel with news about Talk. Even if you turn this off, the channel will reappear with the next news. I find this interesting too - but the users in this instance can’t do anything with the information - it bothers them. So I use css again to suppress this, but in the dashboard the news appear nevertheless.
If we had the infrastructure to also use the possibility for video conferences, that would be really great. But since we do video conferencing with 10-20 people, that’s not possible for us. Therefore, it would be useful if we could hide the icon for initiating (video) calls.
Ideas:
• The possibility to add special icons and / or colors to a channel
• Allow suppressing the Talk-News channel
• Allow threads in channels
• Allow suppressing the call icon / functionality

Deck
We will use the Deck app to structure and organize larger events.

To keep different areas of a topic together, I created projects. However, I find neither the creation and editing of projects straight forward, nor the finding of the same.

I would like it if there was - at least additionally - an app to manage the projects. Unfortunately, I don’t have an idea where projects should be displayed when an object is included in a project.

Calendar:
We use separate calendars for each topic group via a group share. This way users can see all the events of the groups they belong to. This is very comfortable!

Two points would be good here: If it could be deselected that automatically a personal calendar is created and if a default calendar could be selected. The possibility of accidentally entering appointments in the wrong calendar is very high.

Contacs:
Exactly the same is true for the Contacts app. We have a shared address book per group. Since we want to manage addresses there in places that really shouldn’t be visible to everyone, it would be great if there was the option to set a default address book for users here as well.

App-Order:
This app has been an indispensable part of my private cloud since its release, again I use it to put the apps that are used the most ‘front row’.

I also use it to reduce the feature set for some users to the point where they only see the Talk app. This way they can only see the chat, but still access and even edit referenced files.

What would still be nice here is if the admin could configure different App Order sets and assign them to users or groups.

Here is an example where only the Talk app is visible:

And here is what the administrator sees:

Only Office:
To work together on documents, OnlyOffice is installed. We use a Docker container as a document server. A problem here is: If a user forgets to set the tracking of changes, it is no longer possible to track what has been changed.
And it is not possible to user templates.

Ideas:
• It should be possible to set tracking of changes as default
• Allow using templates

Polls is installed for scheduling and small polls.

Forms:
To initiate surveys among the population, we can use Forms.
We have also significantly adjusted the look of the survey pages: 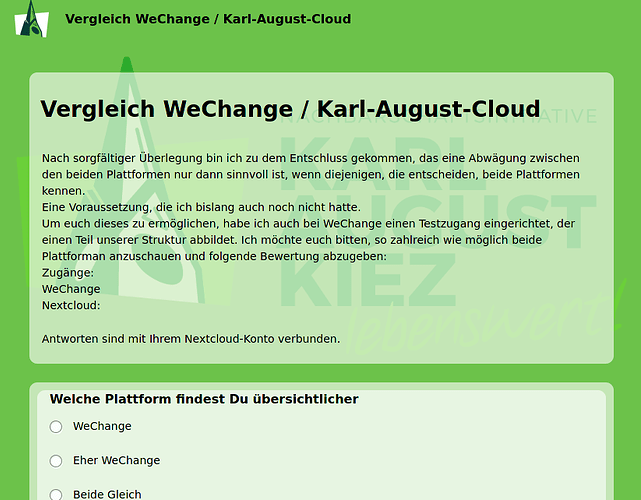 image824×642 87.5 KB
As those who understand German can see from the above figure, we are still in the evaluation phase as far as our future platform is concerned. But I am confident that in the end we will choose Nextcloud.

To sum up everything: Even if I have a lot of ideas or wishes, it’s great what can be realized with Nextcloud! (I already have some small changes for the Mail app and in the initial stages for the Tasks app. So please dont blame me for not being constructive enough

Thanks to the Nextcloud team and the developers of the various apps!

Hello Holger,
thanks for showing your use case! very useful ideas for me. I’m working on setting up a similar project.
also I am seeing some limitations you mentioned as problematic.

Hi Nikolaus,
I tested the Circles app as well, but I decided not to use it because I suspected that too many circles would be created by the users. Currently I manage everything via groups and administrators for the groups.
I use anneuncements only if I do some work on the server - just in case anyone wonders if some apps are not available.
I did not yet communicate the ideas - just because of lack of time. I still plan to do it in the near future.
What kind of use case do you have?
Holger

Hello Holger,
we are a group of people Living in different parts of the World and we are working together on a non IT related project, it’s about social change and communication. in the beginning there are around 30 people involved working on different projects. at the moment they communicate via email, wich is $#&$, so I proposed to use NC.

The main challenge is to set up a communication strategy with NC wich is doable and clear for not IT related people. There are some loose ends in NC like some you mentioned above wich make it hard to use for these people.

In the next 3 weeks I’m working with a group of 5 people and we will see if my ideas are understandable. I will describe it here after the test phase! I think it’s quite similar to yours!
Nikolaus