I have installed the Nextcloud SMS app as well as the Android app ownCloud SMS.

The SMSs are transferred from the phone to the NC server correctly.

If i delete some messages by the browser, they will not be deleted on the phone.

Therefore the question: Should the app be a two- or one way synchronisation?

In my opinion it should be a 2 way sync if i look at the config page of the Android app and the description on Google Play Store:

but please correct me if am am wrong.

It is not more than a simple backup at the moment, imho. The word “synchronize” sounds better.

it is afaik just a 1-way push to the server

That should be mentioned on the Google Play Store IMHO.

As well as on the “Enabled Apps page” of Nextcloud. 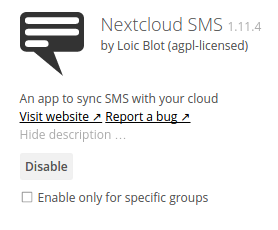 You can rate the app according to its functions.

What else of Nextcloud is also not working as expected?

That would need to be mentioned to the app’s developer on the issue tracker.

can nextcloudsms or nextcloud phonesync push the text back to your phone after a restore?