Hello, I will first explain the system.

The system runs as a VM on a Windows hypervisor (Windows 10 Pro with Hyper-V).
Nextcloud was installed as a snap package.
Nextcloud’s data directory has been changed to “/mnt/Storage” as this is where the RAID is mounted.

I also installed a Samba server. I created a share for a Nextcloud user’s file path.

However, I have the problem that if Nextcloud is the owner of the “/mnt/Storage” folder, the SMB share will no longer work because Nextcloud will overwrite the rights again and again.
I then made the “Administrator” user the owner of the folder. After that I got the following error message from Nextcloud: 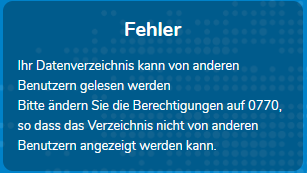 error
Your data directory can be read by other users

Please change the permissions to 0770 so that the directory cannot be viewed by other users.

The bigger problem, however, is that when I copy files to the user directory via the Samba share, they do not appear on the Nextcloud-Web-Interface. How can I solve this?

Use: occ files:scan to show the files and change the files to something like www-data:www-data

And welcome to the forum!

It is absolutely not a good idea to share nextclouds user file path via samba.
Any changes on the share made from the users will not be detected by nextcloud.
You better mount the smb share using external storage app.