It looks like Nextcloud is ever so sightly changing direction…

Remember VMware’s attempt (circa 2012) to create its own public cloud to compete with the big boys? It lasted about five years and in 2017 the idea was abandoned…
Instead, VMware went on a deal making spree and now is the key component in all big public clouds including Microsoft (that has its own Hyper-V).

And its stock price reflects the wisdom of this decision…

Something very similar happened with NC20.
Most of the new developments revolve around making Nextcloud the “glue” between different technologies, it’s even in the title 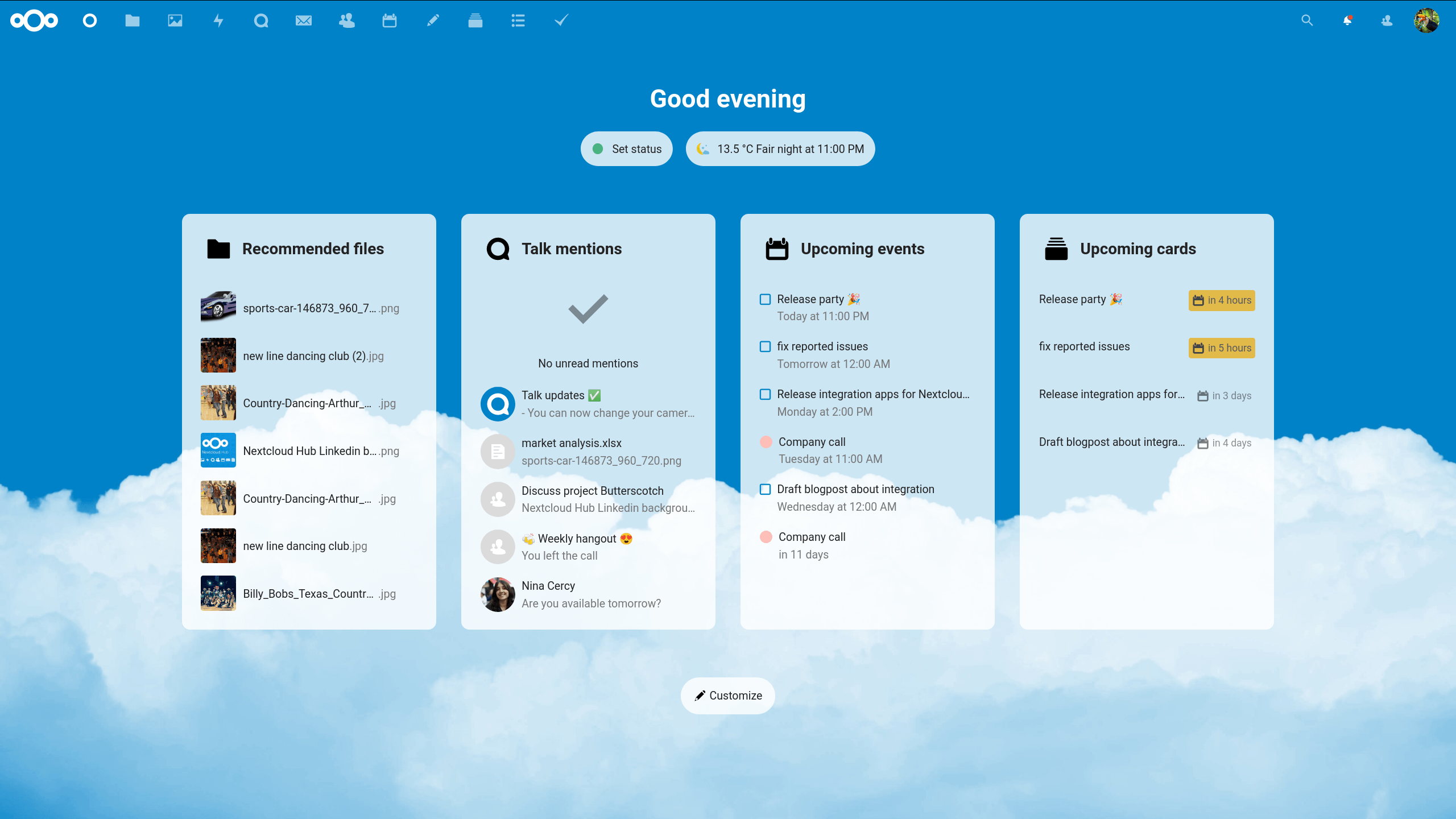 
Very reasonable write-up about “playing ball” with others including Microsoft Teams (I never thought to be able to use “reasonable” to describe anything authored by Jos, but I digress…)

I believe this is positive development…

I’m not sure if I hear much sarcasm or irony here. Honestly.

What is your prediction for 2025 for Nextcloud?

…if I hear much sarcasm or irony here.

What is your prediction for 2025 for Nextcloud?

Microsoft must not buy it. The software is AGPL and Microsoft can host it for millions users in Microsoft Cloud

But i think it would better than Office 365

To complement its WSL …

NC’s bet is GDPR driving the big three - Amazon, Microsoft, Google - out of the EU market.
Or at least reducing them to “competable” sizes. Will make for a very healthy cloud market…

Big corporations don’t do cloud in-house, never will… NC’s market is niche.
And NC20 shows they are ready to embrace this future…

That is a statement.

The comparison with the mobile phone providers is interesting. I hope the EU is as consistent.

Nextcloud can have plenty of customers…

I’m in Canada. We deal with health data. Need 100% on premises solutions.
This is why I started with ownCloud and moved to Nextcloud (more flexibility).

I don’t give a *** about all the “social” apps and connections, most of my users are not even online… Our 2FA backend is privacyIDEA, also a 100% on premises (as opposed to DUO)…
Since we have just ~200 people, I can do this myself. Bigger groups would be NC’s customers.

The question is, how much of Nextcloud 20 is strategy and how much is simply because customers or the community requested it and/or contributors have shown up with enough motivation and knowledge to (help) implementing certain apps or features. The strength of open-source and a vital community is that scopes and use cases widen on its own in an organic way. Great as long as there are still core devs working on a solid core, which is the case from what I can see.

…and not being distracted by building 300MB built-in Office apps.
This!

You cannot ignore the need for office solutions. You can see that from the fact that Hancom is now joining the team.

OnlyOffice (?) is probably a bad example to argue for strategy changes with NC20, as it exists since more than three years, starting with NC11. Okay that is basically true for a lot of social-integration apps as well that you indirectly mentioned. As said, organic natural grows/extension instead of a sudden decision by any party, from what I can see.

Also OnlyOffice is developed by Ascensio System SIA, including the ~1 MiB Nextcloud connector app, AFAIK? Of course indirectly that draws core developer time as well but it is simply wrong to assume that core development time is shifted towards non-core apps only because Nextcloud of course promotes them via blogs, conference talks etc. Instead additional development time is going there or even mostly time from 3rd party organisations or community members.

EDIT: Ah sorry, didn’t know about the indeed fully integrated document server yet: https://apps.nextcloud.com/apps/documentserver_community
Not sure if Robin (main contributor on that project) is part of Nextcloud GmbH paid developers? I would still argue that widening NC use cases and allow easier setup for additional features like OnlyOffice and earlier Nextcloud Talk as dedicated Spreed.ME server replacement, leads to more and more sustainable development time being available for core features.

OnlyOffice (?) is probably a bad example to argue for strategy changes with NC20…

I didn’t.
The sign of strategy change is NC20’s ability to interoperate with Teams, Slack, etc.

And this I believe is a sign of maturity, grown-up behavior, the opposite of trying to find ways to squeeze the word sex in their PR leaflets in the past…

I would still argue that widening NC use cases and allow easier setup for additional features like OnlyOffice and earlier Nextcloud Talk as dedicated Spreed.ME server replacement, leads to more and more sustainable development time being available for core features.

The sign of strategy change is NC20’s ability to interoperate with Teams, Slack, etc.

Okay, but integrating 3rd party platforms was done a long time as well, Dropbox integration was IMO the central feature that allowed ownCloud that time to become even a bid relevant, I guess was possible right from the start (?), and social plugin integration for Twitter, Facebook via social sharing apps starting with NC12 as far as I remember, then RocketChat, of course Collabora online (external server connector) etc.

And this I believe is a sign of maturity, grown-up behavior, the opposite of trying to find ways to squeeze the word sex in their PR leaflets in the past…

I think both is good, offering own, completely self-hosted solutions and as well offering to integrate the big conventional solutions, at best to allow a seamless transition for users, same as with Dropbox => Nextcloud for the core data storage and sharing functionality. That transition was btw more than once topic in the NC conference talks the last two days

Not sure about that, I was using Spreed.ME that time, even learned how to create systemd units and wrote a HowTo about that to get the server running from boot on (my goodness, I didn’t know what a systemd unit is 3.5 years ago

), and I remember that a lot of users complained and raised issues and finally didn’t use it because it was too complicated and stood with Skype instead. Nextcloud Talk integrated WebRTC server changed that radically.
In case of OnlyOffice, even as standalone server it was already a big enhancement over Collabora online when it’s about setup effort and system requirements but a feature is likely MUCH more used when the whole install/setup is not more then hitting the “Install” button in the Nextcloud app store. I cannot really evaluate the effort for creating this built-in compared to the previous connector app for the standalone server, but when you take development time per end user as the relevant metric, I guess a complete integration wins in very most cases.

And remember the shared hostings, where users have often not the possibility to install additional servers, so a full built-in is the only possibility.

And remember the shared hostings, where users have often not the possibility to install additional servers, so a full built-in is the only possibility.

I’m not saying it’s useless, I’m saying there is no commercial future in it.

This was discussed a few months ago, I described what I think is the preferred development…

The future of Nextcloud and philosophical ramblings general

An excellent summary of NC’s best features and biggest potential - federation! There is just one statement I disagree with Since we are into “philosophical ramblings”, this remotely resembles the 30 years old Tanenbaum–Torvalds debate, monolithic vs. microkernel design, despite NC having nothing to do with kernels… I believe NC should be a Dropbox alternative with a bunch of standard compliant “hooks” (apps) to connect to other external servers/services LDAP for external user directories S…

Okay I got that point, and indeed for larger companies, the typical paying Nextcloud customers, standalone servers are probably the more reasonable solution. Not sure how many mid/family-sized companies/organisations are paying customers where the built-in solutions are just fine and accessible as well without a dedicated system administrator.

However, still Nextcloud development, especially when it comes to apps, is as well community driven and often non-staff community members work together with paid developers or contribute significantly to features or apps, and I am pretty sure this is where the built-in easy-to-setup integration is mainly driven from. Finally the whole eco-system benefits from this contributions directly or indirectly because the core infrastructure is enhanced along with it. So when only concentrating on features and apps with direct “commercial future” I think Nextcloud would die earlier or later due to unhappy community and decreasing “free” contributions. As well non-paying users serve for feedback, testing and bug reports etc, the more users, the better in this regards, as long as the feedback channels work fine (general questions and reports on forum first, final concrete bug reports and feature requests, at best pull requests on GitHub).

But yeah, this is at the boarder to philosophical discussion indeed, probably there will be never a final answer to whether the one or the other way or something or drilling one in the middle is right, trial and error, feedback and communication is everything

There is no doubt open-source, whether GPL- or BSD-like, have changed the software industry over the last 25 years… Microsoft went full circle from Linux=cancer to incorporating it into Windows, and doing all that without stopping being “evil”…

NC hit all the right notes when forking ownCloud… And its popularity is best proof…
But this is 1999-like tech “exuberance”, it can’t be a business model. You have to grow up.
People like Jos have to shut up and realize not everyone has access to what he is smoking…

Can there be a balance between those two - commercially viable and open-source driven?
I think so… And NC20 I believe shows they are up to the challenge…

[quote removed because the original statement has been removed]

Please don’t personally attack people here (doesn’t matter if they are from Nextcloud GmbH, Community or even Microsoft) - this is just silly and no argument.