I have 3 different installations of Nextclouds 25.0.1 running. Two of them are on a lower end server (Raspberry Pi4 and Intel Nuc core i3 with 4GB RAM and 12 GB RAM). Both smaller systems occasionally stop responding with a laggy SSH and server performance. The Raspberry with its 4 GB of RAM starts swapping another GB into its swap file and is completely offline for 15-20 minutes when the cronjobs of nextcloud are running.

After the cron jobs finished, everything turn back to normal until the next cron is working. I checked the database table oc_jobs and found several thousand entries of class “AddPhotoJob” from the Maps application. Once I delete those jobs in the table, the cron is working again and finishes after 5-10 seconds, without using 8 GB of RAM. Thus also no swapping.
In mariadb:

After that, the servers run normally again and all following cronjobs need a few seconds. I also got rid of the error messages like:

It seems that the maps application needs to be fixed to not kill the cron jobs?

I deleted this one and it seems I do not get those database entries anymore, while the NC cronjob is working well.

As soon as I execute occ maps:scan-photos again, I get the table entries back and the cron job blocks the server again with swapping Gigabytes of RAM. 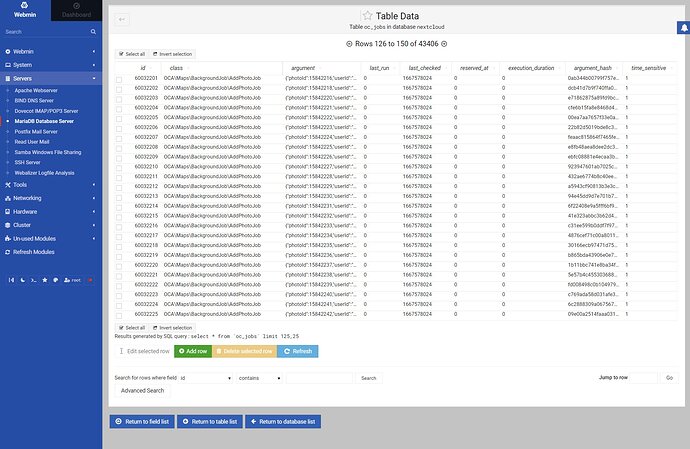 So it seems that the occ maps:scan-photos adds a job for every single picture I have stored on my nextcloud.
Can’t the maps app use its own table like “oc_maps”? If it stores all entries in the cron “oc_jobs”, the general cron is killed if it is run every 5 minutes. It does not even finish until the next cron job ist started and this leads to a fully unusable system if you store a lot of pictures on a Raspberry (mine has a 4TB USB drive attached with 250k pictures on it). I have no insights about the maps developers decision to store this into the regular cron job table, but it seems a bit of an unlucky practice to me.

This is the way to do it. Search the generic errors against the forum and github and the internet. It is the same thing we other volunteers do.

what is the solution or the correct way to have the maps app running?

No idea, because I don’t use it.