Just wondering for pc client, and the Android client. I’d like to be able to browse my folders and files, but not download everything locally.

On the pc client, if I uncheck sync folders, there’s nothing there! That kinda makes sense, but I think Nextcloud should come at it from a different angle. Everything is browseable, then when I open something, it gets downloaded and cached, and starts adding to a local cached allotment.

I want access to my several hundred gigs of stiff, but don’t require it all on my pc or android.

Just take any webdav client on your operating system. Then you access files directly on the server. On Windows you can use WinSCP.

so would I run WinSCP each time and connect via my webdav link from the bottom of the web GUI? Is there a way to make a webdav folder on my desktop so I can just doubleclick and go into there and browse? thanks!

Here’s a handy guide to mounting webdav in Windows: http://www2.le.ac.uk/offices/itservices/ithelp/my-computer/files-and-security/work-off-campus/webdav/webdav-on-windows-10 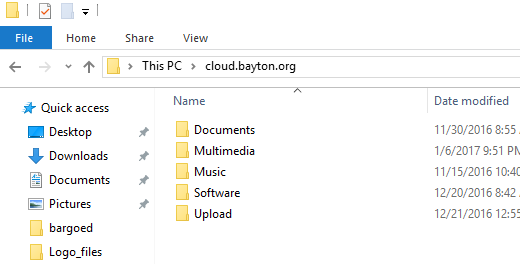 my nextcloud install has both a self-signed cert for https access, and a non-standard port.