Help me test this 3 node cluster

I’ve just finished setting up a cluster across 3 servers with MariaDB Galera and Syncthing for almost instant replication.

It seems to be working very well and I can’t force it to error out on me with large uploads, however if anyone would like to try to break it I’d be most appreciative!

If it remains stable I’ll have a guide written up sometime this coming week.

These servers are currently HTTP with no cache enabled, just so you’re aware. They’re also v. 11.0.3 simply because that’s what comes down when grabbing latest.zip.

Topology diagram will be available tomorrow if anyone’s interested.

Of course with Global Scale, this has probably been rendered entirely moot 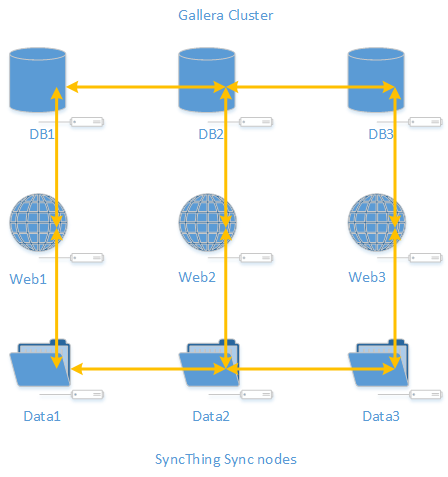 Call for help still current, feel free to load it with junk data and let me know if the sync/server dies!

nice! immediate sync…
What happens if you add apps like notes?

it’ll all go wrong.
Apps are in another directory outside of data and aren’t synced. Good shout.

Perhaps, then, I should be replicating the whole nextcloud install.

There we go, the 3 folders likely to change in an install.

Ideally I’d just select the install dir entirely, but I’d have to put a sync exclude file in it for config and that’ll cause integrity issues.

I left a note on the first server. Try to test it, if you plan to use serverside encryption.

Server-side encryption is not that incredibly useful in <=11.x, I don’t know if that changes in 12 really.

I’ve made some changes to the system.

So it’s all well and fine having servers each accessing one database in a remote location, and accessing those servers via individual hostnames, but it’s not exactly a transparent, seamless experience.

So I’ve spun up a couple of haproxy servers to handle the loadbalancing, and now there’s one hostname: http://j.son.bz/nccweb0 and one database hostname for all servers to connect to: 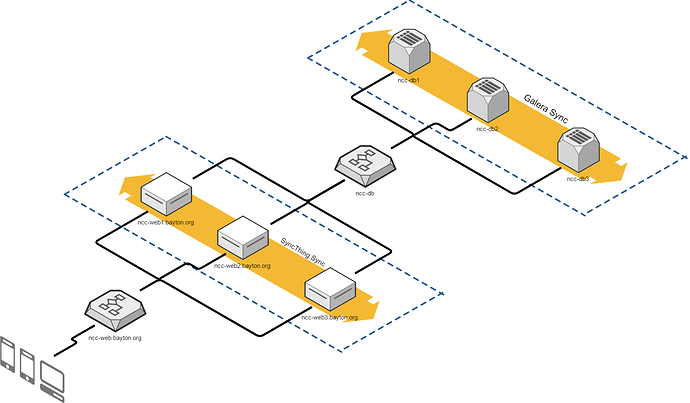 haproxy handles it well, currently favouring one combination of servers unless they go down, then dynamically switching to the other(s) within ~3 seconds. Not too bad.

Sync is still working great too.

I’ve got HAProxy configured to preserve sessions normally, so it’ll hit one node and stick to that unless it goes down.

Yesterday in conjunction with running a loadtest I switch it to favour least connected, so with every connection it calculated the node with lest usage and forwarded requests there.

I then started getting the infamous CSRF check failed error when loading the cluster hostname.

I’m aware this is likely a configuration error on my part with PHP so won’t raise an issue, but if anyone has advice on how I can overcome this in a clustered environment I’d be super grateful.

You may want to look into using Redis as session storage.

Redis is an open source key-value cache and storage system, also referred to as a data structure server for its advanced support for several data types, such as hashes, lists, sets, and bitmaps, amongst others. It also supports clustering, which...

the next thing is, what if user A edits a doc/odt file with collabora or onlyoffice on node A, User B edits that same file on node C? Will they see each other then? If not, then there will be sure a dataloss.

Collabora/OnlyOffice is a whole different beast to tackle, however as OO supports clustering:

I can’t see it being a problem.

@LukasReschke thank you, I’ll have a look

First impressions suggest redis doesn’t do multi-master, so if this is spread across multiple DCs I’d wonder how it’d scale

OK, it looks like session storage is setup, No more errors under load

I’ll have to come back to clustering redis somehow though as that won’t scale.

Interestingly I just noted this on the deployment recommendations:

I guess that basically brings this experiment to a close as master-master has been pretty fundamental to what I’m trying to achieve here. Without instant replication to and from any node using Galera, I can’t see any way of having users on nodes throughout the world being able to instantly sync changes back and forth seamlessly…

Open to other suggestions

Furthermore I don’t think redis is going to be suitable; it doesn’t look like it’s designed to be run open on the net which it will need to be since no master-master configuration is supported and running VPN/tunneling isn’t super convenient between nodes.

What about PostgreSQL as database? Does this one offer the possibility Galera doesn’t? For Redis, I don’t have an idea.

No, looking at StackOverflow postgre is not ideal for master-master.

Very interesting.
Do you try it with mariadb 10.1 wich integrate master-master gallera ?

Note that Nextcloud doesn’t support a master-master on database level, this can lead to nasty problems. We’re usually recommending using something like MaxScale to split read/writes to different databases.

The idea was straightforward - if someone uploads a doc in Amsterdam it updates all databases, so someone in UK sees it on their node instantenously. Similarly UK to Amsterdam. This way a master db can sit alongside each node, they all stay in sync whoever does a write from whatever node and winner-winner chicken dinner.

Doing a master-slave setup would be OK in terms of reads (slave with each node), but for writes the latency will grow the further away it is, obviously…

Galera master-master is in place and working fine with 6 web nodes at the moment, each node that does a write is directed via haproxy to any master and the others replicate immediately. It’s beautiful.

Data sync is syncthing, which I’ve now setup to basically replicate the whole nextcloud install folder, not just data. I did this for two reasons:

Good very good. I use also master-master with haproxy in front in another projet and It’s works fine and add a new mariadb master is so simply.

What is “Data sync” ? I try glusterfs, lsyncd, drbd for found a a multidirection data sync. So I want only opensource solutions.
Problem, glusterfs and drbd make storage slower. And lsync is not done to bi-directionnal sync.