Edit: OnlyOffice does not support it’s own Nextcloud integration via mobile apps at this time. Wow, this is very unfortunate news. Click here to see the open Github issue.

You can request mobile app support by kindly emailing OnlyOffice directly at support@onlyoffice.com

No longer relevant, but I’ll leave here any case anyone runs into this issue…

I see the option to login into personal or portal accounts via the official OnlyOffice Android App. I’ve tried logging in with both options unsuccessfully. Also tried using my main password vs. one-time passwords with no success.

Asks for my.server.com domain, user name and password. Perhaps personal Nextcloud instances are not supported at all… I see users can use OnlyOffice’s own cloudstorage, Facebook, or Google credentials to create a supported account.

Thanks a lot for leaving this here. It seems like they have deliberately ommitted this information from anywhere in order push their portal services.

I seem to be able to connect to my Nextcloud account to edit Onlyoffice files through their mobile app now. As of June 11th update on Android

How are you doing it? I just reinstalled the app, but there is no such new option and it does not recognize the URL of my Nextcloud server either.

Oh sorry; On their Play Store screenshot it shows the option, but when I try to do it on my App there is no option to select another service besides OnlyOffice. Possibly their marketing department is moving faster than their production team. 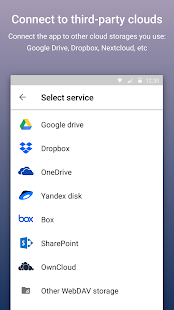 No, it works with their Community Server, which you can also selfhost, but it mostly duplicates the features of Nextcloud. There is an option in the community server to link to Nextcloud via WebDAV which works fine.

Can anyone confirm if Android version works?

Yes, apparently this function was added in the last update of the Android version as well.

I can’t get it to connect right now, but my Document Server is an older version that might not be compatible.

Yes, it works on Android! But indeed only by adding it as a generic webDAV. On latest server version of Onlyoffice.

It’s possible for me to connect via nextcloud or webdav.
But I can only view the content, edit does not work.

For editing you still need Onlyoffice community server as advertised.
It is still a nice free viewer at least.