I am writing a grant for student access to nextcloud VMs. I need to budget for physical machines. The question is, how can I estimate the number of VMs running just Nextcloud Hub without Talk that can be supported by a single physical machine?

Any insight is appreciated, however partial. For instance, if you have experience with particular hardware supporting several Nextcloud VMs, please share! Of course, I’m also interested more generally in how the number of VMs scales with a combination of the PMs attributes, like number of cores and amount of memory.

Perhaps this is not a good document for you. But i want share it with you:

Why do you need to run them in VM’s? It would be a LOT less load on the system just to provide a virtual host for each nextcloud instance. You could basically run an unlimited number of nextcloud instances on a single machine, bounded only by the traffic load and storage capacity.

…how can I estimate the number of VMs running just Nextcloud Hub without Talk that can be supported by a single physical machine?

That is assuming you run a Type-1 hypervisor (e.g. ESXi) off of a USB…

If your license supports overprovisioning, you can probably run 50% more (12 VMs).

I do have such setup on a Dell OptiPlex - Nextcloud, ownCloud, coTURN, OnlyOffice, WordPress, Jitsi, BBB, Asterisk separate servers…Working fine.

This is a really helpful example of what TUD did to scale a larger deployment. Thank you for sharing this.

We see value in the experience of students setting up their own self-hosted instances on VMs, but I do take your point. 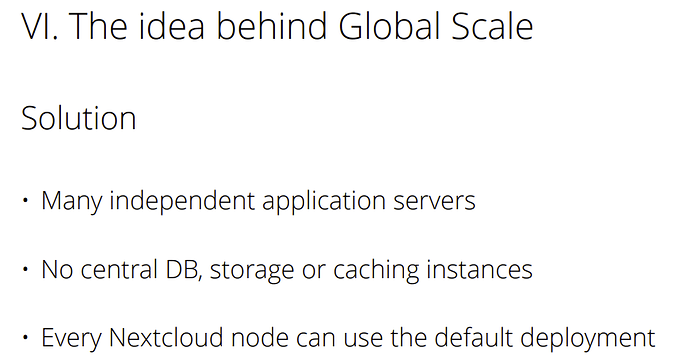 Distributed computing at its best! What the internet is all about!!

Thank you! (Your assumption on the hypervisor is right). I would have thought that memory was the bottleneck, with very modest CPU requirements for the kind of basic Nextcloud instances we’re running. Have you bumped up against a CPU bottleneck with machines that have more than enough memory? I want to get as much “bang for the buck” per physical machine as possible.

Have you bumped up against a CPU bottleneck with machines that have more than enough memory?

No, I haven’t. But the mentioned setup is my personal.
At work we use Dell PE740 all-flash vSAN clusters and run few instances of Nextcloud.
But all of them are for small groups of people, behind a vASA firewall (AnyConnect).

We are not short on CPU power, always use 8 cores at least…
(I work at a university).