Error Message from Desktop Client: Conflict when uploading some files to a folder. Those, conflicted, are going to get cleared!

Looking for some help if someone has come across this error message or configured a server like this in the past - perhaps for the first time ever a quick Google search of the error message I’m getting didn’t really turn up much.

I have a Nextcloud server running on Ubuntu 20.04 LTS with Apache, PHP, MariaDB and Redis that I’m trying to proxy through CloudFlare for security purposes. I’ve followed the guidance from Autoize to disable CloudFlare’s caching and performance features and everything is working great with the exception of an error message when uploading files from the Windows desktop client. Note that while the sync client throws tons of errors, everything appears to be working fine.

When uploading files from the Windows desktop client (3.3.2) I’m getting the following error message “Conflict when uploading some files to a folder. Those, conflicted, are going to get cleared!” 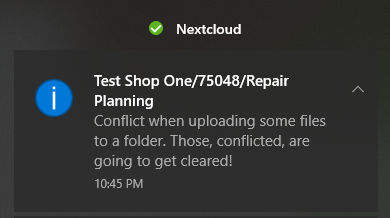 No response to this?

This is a community forum where we volunteer to help each-other, not a paid support system. Business clients of Nextcloud Gmbh have support contracts, and there are other professionals whom you can hire to provide support for pay as well. Beyond that, you can ask, but there is no guarantee or obligation on the part of anyone here.

I’ve found the best way to get an answer is to rephrase the question or add new information as it becomes available, such as whether any messages show up in the logs server-side, or the results of anything new you try, like adjusting client settings.

Can you tell us whether any of the files you’re uploading have the same or similar file names to existing files?

Thanks for the help. I couldn’t really figure out an option to get this solved.

So I started out with all the same files in March on both versions, I delete the sync tool, work on the desktop update a couple dozen of these files, then in June, I have a June version of the desktop folder but the cloud is still the March version. So I download the sync client and update the March version. Can’t the sync client see that 98% of the files are already the same, leave those alone and then simply update the ones that have changed making the two folders now the new June version?

That’s what I want but I’m getting this weird error message as mentioned in my post.

Thanks for any help you can provide.

Did you ever find a solution for this? I have the exact same issue, even though the upload works flawless, the errors are still shown…

I did a couple of things - not entirely sure which one fixed it to be honest!