Edit files in Collabra, but no versions are created

When I create an Collabora file and online edit it and after that close the file.

These edites are also not mention in the activities application.

Nextcloud is on version 11.0.2 and I just did an docker pull Collabora command. So both are recent.

Also I created an screencast for this: https://share.piscaer.com/index.php/s/F4BmIyZU5GOWyZU The password is: This_is_the_public_passw0rd

I also created an issue 4172 on github: https://github.com/nextcloud/server/issues/4172

same problem here. Also everything is uptodate. nextcloud is running on ubuntu 16.04 64 bit

Thank you for the quick fix!

I use this fix. It’s working good.

This does not fix

Please see the screencast “Activities_and_view_revisions.avi” for both issues. Do I need to create a two new issue for both issues?
Screencast: https://share.piscaer.com/index.php/s/F4BmIyZU5GOWyZU The password is: This_is_the_public_passw0rd

Hi all,
Paches work for versionning.
Thanks

I have added both patches, and found that in the Versions list it shows ‘Changed by’ with an invalid Avantar (as the 11 min ago), while other edits I done before (outside of NextCloud and then synced) do show stating I made the changes (24 days ago). 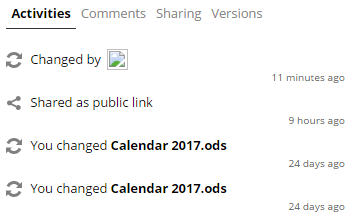 Running NC 11.0.3. Anybody know why this would happen?

Before fix Changed by was OK
Who can Help?
Thanks
Guens