I have just installed Nextcloud on my raspberry pi 4 (replacing BarracudaDrive that I had on my old raspberry pi 1).

In order to start working on it, I need to create additional users (currently I only have the administrator user I created during the setup), but I couldn’t find a way to do that. Under the users tab, I only see the list of the users (which includes only one - me), but have not place to add another one.

Can you please help? 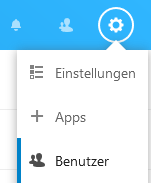 do you see this in your gui?

No, it is not there when using chromium. Tried it from my phone and it’s there. Seems like a bug.
Thanks!

it is not there when using chromium. Tried it from my phone and it’s there. Seems like a bug.

Have you resolved the issue? I don’t use anything from Google, so I can’t comment on Chrome, but I’ve found the level of compatibility across browsers to be very frustrating.

I used to primarily use Pale Moon, but there were bugs and incompatibilities with the Contacts app. I had different issues with the main files interface when using (the original EdgeHTML) Edge. I got desperate so I installed Vivaldi (which uses Chromium’s Blink engine), but it also had issues, except this time with Calendar and the admin’s Apps page (I’d get a spinning circle forever in both pages).

The only browsers I’ve tried and not had issues with are Waterfox and Firefox. I’ve brought these issues up before only to be told “it should work with all modern browsers”, which is painfully unhelpful.

It feels like we’re back 20 years in time, where you used Netscape or Internet Explorer, and each page will only work properly with one or the other. Except is now between Mozilla and Google, and devs are coding only against one or the other. It’s very hit and miss if you use any of the various forks and flavours (e.g. Pale Moon, Waterfox, Brave, Opera, Seamonkey, etc).

It doesn’t help that mobile browsers are overwhelmingly Blink/Chromium-based, which further narrows the dev’s testing.

I’ve had to settle for only using Nextcloud in Waterfox (logged in as a standard user) and Firefox (logged in as admin) on the desktop, and Brave on my phone and tablet. I hope you found a satisfactory solution, because there’s no good one!