Comparison of Collabora on the built-in and own server

In Collabora Online 3.7.0, it was stated that CODE would be prepared as an NC application.

I have CODE installed on my server, but when I compare it to the NC app version, which is better?

In Collabora Online 3.7.0, it was stated that CODE would be prepared as an NC application.

I’m not aware of a built-in collabora within nextcloud. There is only an app which manages the integration of a stand alone collabora server into the nextcloud environment / other apps e.g files A similar built-in solution has been provided (since NC 18) by OnlyOffice which supports Microsoft file formats .

It is described in the description within the Collabora Online 3.7.0 (NC) app. It’s not on the App Store yet, but perhaps an app like OnlyOffice will be released in the future.

and directly below an additional information -> *This installation does not have a built in server. [Install it from the app store.]
Unfortunately I cannot find it on the store. Regardless of that, It will be probably not possible to run the external CODE-Server and the internal one in parallel.

I don’t think there is an NC app version of CODE at this time. It seems to me that I am missing the point.

One advantage of a separate, own server is the flexibility you have to use it outside of NC also. Probably is a separately operated server better scalable then a built-in one. The built-in one coulb have some advantages in terms of integration with NC and - for many people probably quite important - no installation effort for a separate server. If this advantages are interesting for your particular use cases is an another question

To be able to compare the functionalities of both of the versions we will probably have to wait a little bit and - when the built-in version is available - install it and have a deeper look inside .

I don’t think there is an NC app version of CODE at this time. 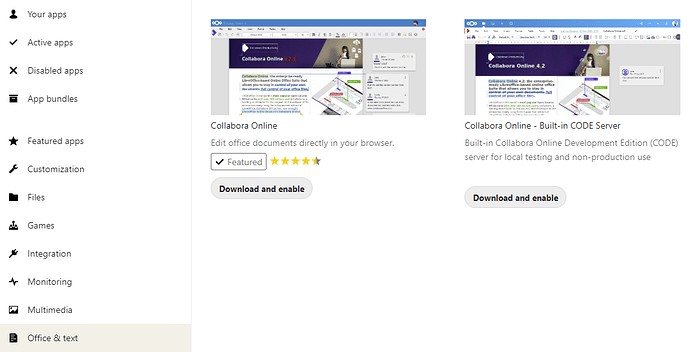