I’ve got the following issue:

The comment-tab remains blank, no older comments are shown, no new comments can be entered.
Same with the aktivities-tab: No entries are shown. 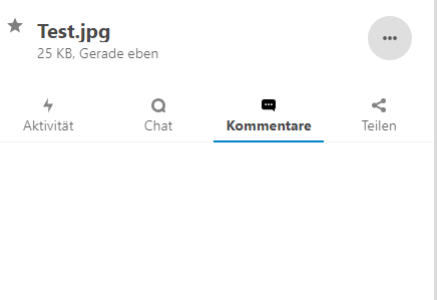 This behaviour only appears in a browser: In the mobile nextcloud-app all comments are shown and new ones can be entered!

The problem was first seen after a huge server-overload, which lasted for two or three hours. Maybe the database got somehow damaged/corrupted by this?

Here is a hint, which might help to track down the cause:

If I create a new markdown document, it is suprisingly possible to comment on the file!
But if I then upload another file, for instance a jpg-file, the comment of the markdown document is shown along with the new jpg-file!
After reloading the page, comments are no longer shown at both files, the tab remains blank as shown above. (But, as said before, the comment is still there and can be seen in the app.) 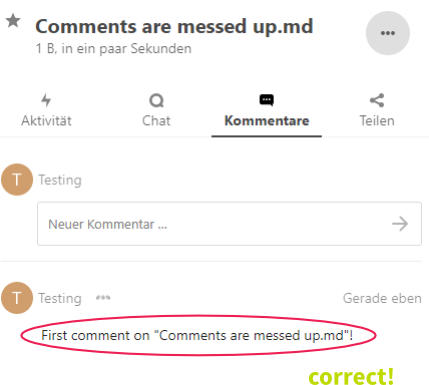 Step 2: The same Comment is shown with a second, uploaded file: 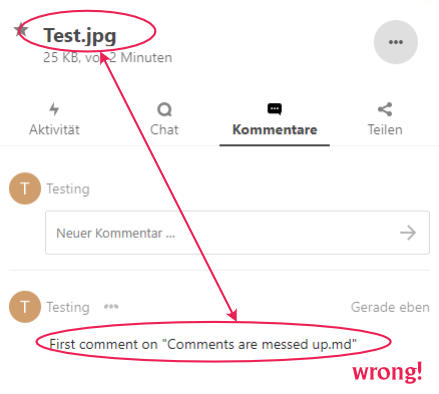 It seems, that the comments-tab isn’t properly “refreshed”.

Has anybody got an idea, how this could be repaired?

Many thanks in advance for any help!

Yes, exactly this happens to me too! There activty, comments and versions tab of file detailes is empty/blank. I am using snappy nextcloud with the channel “18/edge”. But I can’t tell you when it did happen the first time.

I see the same problem, was an issue raised on github for this?
EDIT: found this https://github.com/nextcloud/server/issues/21239 and it’s fixed in 18.0.6