You are right. I’ll change it to something like that. Change should be live in about half an hour

I saw the same problem on an self-made installation with the docker image for a company I’m working with and we’re all a bit upset by what I’m reading here. If I understand the answer to « why », I don’t like the communication around and the <ay you did it, sorry

. This solution is working well with 10 docs open in parallel or more than 20 connections so… I don’t really understand.

I now need to find solutions.
Is there a way to remove this message or change limitations number?
Can someone confirm this limitation is only in the docker version?

I also search for way to disable this limit, it is up to us to decide is it OK or not to run on more then 20 users. At end this just cause more expenses without any specific need.

with regards to 'can you install a free unlimited version' - sure, you can, compile it from the source

The image Collabora provides has this limitation for the reasons mentioned. It wasn't my decision or choice, but I think it is entirely fair and their right, they provide this for free and have a right to try and ensure potential customers don't try and run a version which isn't designed for scalability. That can harm their reputation…

Yes, that is basically OK.
But: This should be openly communicated BEFORE people try to install this.
There is no word on such a limitation on the Nextcloud website.
There it’s all just ‘this is our answer to Office 365’.
Which it obviously isn’t.

And Collabora seems kind of wanting users to get hooked up and then sell them a hosted version. 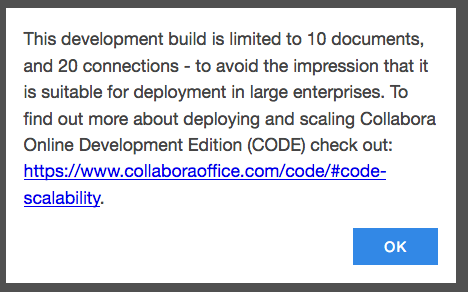 I still have RAM and CPU for having more connections or documents, but Collabora Code don’t want me to.

I’ll have to dive into the " Build LooL yourself" using github and a lot of disk space and compilation time… too bad.

Just a thought around this issue,

CODE is a test product, and the test experience was provided for both ownCloud and Nextcloud.
Hence the name CODE - Collabora Online Development Edition.

Collabora Online has a cost to pay the developers who write and maintain the very same code we are using, services and also make enough profit to pay their mortgage, food, whatever.
That’s not hard to figure it out.

FLOSS projects/companies also require real money to exist, the nice part on this side is that no one is selling ads on your server or secretly gathering personal information or even big chunks of data like other services do (yeah FB i’m looking at you).

If people is willing to give that away that easily, there it is Microsoft 365.
Oh snap!

but that costs money too.

Finally CODE is not part of Nextcloud, we can choose to use it or not.
So let’s make common sense common practice.
Cheers

Collabora is not a FLOSS project its a sham of a project that resembles FLOSS. They maintain that, it is but the reality is different.
This would be no problem if it was not for the removal of the documents app as then Nextcloud as an opensource project would have choice in this particular arena.

Collabora is something that infuriates me as it is from closed minds who can not operate in other manner than an extremely closed commercial entity that FLOSS is supposed to be a better alternative to.
Stallman was a crackpot and FOSS & FLOSS is a misnomer and Eric Raymond was bang on the button, as user led open source software is a collection of mutual benefit relationships that makes better and more efficient software and product.
Irrespective of my opinion Collaboro niether falls into the Stallman or Raymond camp.
CODE is a closed advertisment for a closed commercial product, you can not even compile the github offerings and get involved with anything from bug checking or development.
It is neither what Stallman or Raymond envisaged and in essence is a scam to put forward it is anyway a piece of floss code.
CODE is purely a limited functionality advert for a commercial closed source product.
That is not FLOSS or FOSS or opensource, they need to be upfront about what it is and not allow the real picture to dawn on actual extended use as its a software version of entrapment.
The reason this infuriates me is that the offering is made flakey purely to keep it closed and this paints a picture on FLOSS software, that opensource is in someway an inferior product.
Then again most opensource software employs a model of service vs a free offering that are at odds with themselves.
It is just a shame minds are so closed they can only think of classical closed source business models.

Collabora is actually a kick in the teeth to the really great opensource software that makes 99% of nextcloud and at times I see them as closed with the FLOSS ideal and sometimes purely a polar opposite as they are closed to possible other business models.

Collabora is not a FLOSS project

You are right, it is not a project, it’s a company and as i said.
Companies need profit to function.

Collabora is a global private company founded by Robert McQueen, Philippe Kalaf and Robert Taylor based in Cambridge, United Kingdom, with offices in Cambridge and Montreal. It provides open-source consultancy, training and products to companies. Collabora's initial focus was instant messaging (IM), Voice over IP (VoIP) and videoconferencing technologies, but the company has since expanded its offering to include general multimedia, mobile web technologies, collaboration infrastructure, automotiv...

I would argue there is no need to infuriate at all.
Any how, i’m keeping my copy of LibreOffice and work from there.

There was no argument there, but companies don’t need to misrepresent there offerings to enable profit.

Collabora’s mission is to accelerate the adoption of open source technologies, methodologies and philosophy.

That is a clear oxymoron in regards to the nature of the release and offerings.

Nextcloud has a preference for MariaDB over MySQL, but employs CODE?!
It is purely preference and valid, but it does question stated rationales and base honesty.

PS another question, does this mean 2 people each with 5 document browser tabs open means the system is maxed?
I would rather have 3 or 5 concurrent users than a hard coded document limit.

Thought as much, really need the documents app back to give Nextcloud choice. I really like LOOL but there isn’t even a single user or small workgroup offering.
One that is valid for my arena’s expenditure, that is.

Besides the max 10 user/20 connections limit, is there now maybe also a document length limit in the latest collabora docker image?

As far as I know not, if this is a public available document, can you share it, so I can try that out under NC 11.0.2?

Hi,
any news to that. I read about 100 users, but cant find the link. What is the actual status? If are only 10 docs at the same time opened possible, its not usable since this could reach one or a few persons. So i agree all guys before. My decision for nextcloud was because of saying it has collab with document creating and editing.

Please offer a SMB version of Collabora that is affordable for such organizations. A five figure sum is just not in reach for organisations of that size.

Please offer a SMB version of Collabora that is affordable for such organizations. A five figure sum is just not in reach for organisations of that size.

You can order at https://nextcloud.com/enterprise/order/ at reasonable prices, under 8K/year for 100 users. Order 3 years at once & you get 15% discount, too

Developing and supporting good software costs money. We will most certainly try to lower prices when we can and if you have thoughts on how and what, you can let me know. But just think how many contracts for 8K we have to sign to pay over 30 people!

@opeeters there is no length limitation, for sure. If the document doesn’t open it must be a bug.

Especially considering their price is very fair, much lower than Microsoft Office for example. And the code is all open source so you can even avoid paying them completely if you don’t want to by downloading the code and building it all yourself.

Of course it makes no sense to feel entitled to the fruits of their work without paying for it. Open source is about freedom, not free beer.

I am very happy that we at Nextcloud don’t have to do things like putting in limitations in our standard packages to stop companies from freeloading but please realize that the fact that quite some companies are using it without paying means we have a lot less developers making Nextcloud better than we could have had if we had made it harder to not contribute in any way.

So maybe I should ask all of you: what do you think? Should we put in some limitations for SMB so they are forced to pay us so we can pay more developers to make Nextcloud better?

You can order at https://nextcloud.com/enterprise/order/ at reasonable prices, under 8K/year for 100 users. Order 3 years at once & you get 15% discount, too

Well, there is still a gap for the 10-50 users range. Below 10 is probably tiny enough to get away without support (like with CODE), but above that would also need a bit of love.

Wouldn’t that get you some more customers too?

Of course it makes no sense to feel entitled to the fruits of their
work without paying for it. Open source is about freedom, not free beer.

Sure, nobody should be. These people probably misunderstood the difference between OSS and “Freeware”.

So maybe I should ask all of you: what do you think? Should we put in
some limitations for SMB so they are forced to pay us so we can pay
more developers to make Nextcloud better?

How about the opposite: An additional subscription tier for 10-50 users?

How about the opposite: An additional subscription tier for 10-50 users?

I’m not against that idea, and it would make sense to offer something however I understand the support offered have to be lower for 10-50 users. SLAs would be different amongst other things as it’s simply not cost effective to support small groups. Fine if all you need is Collabora and the occasional 72hr guaranteed response though