In the general admin settings of Nextcloud we have some setup checks that detect common misconfigurations or show performance warnings about things that can be (easily) improved. Sometimes apps have optional parts and it would be beneficial if they could integrate into this mechanism. 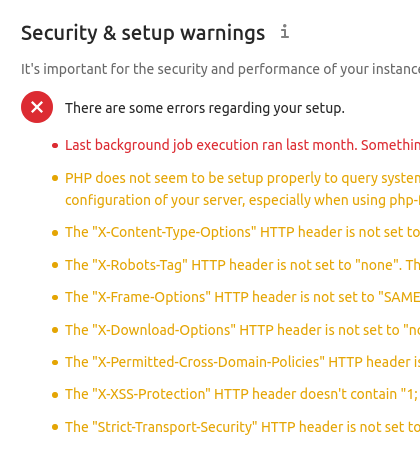 One example is Mail where the kitinerary integration ships an executable that only runs on Linux x86_64. Right now every invocation will first check platform compatibility, and spit out a info log about being unable to run the executable. But it would make more sense if that was shown only on the admin overview page. Then you know about the potential limitation/problem before making use of the feature.

If this makes sense I could look into a PoC for an API. I think this could be a simple interface to implement for each check and registered via IBootstrap::register.

@juliushaertl @nickvergessen @PVince81 what do you think? We need it for groupware, so I can try to do the work but would appreciate feedback on the idea and proposal.

Makes sense, I can also imagine this is quite useful for Office related apps to quickly hint on possible setup issues.

Talk also looks forward to it