I am trying to get email notifications sent to the Admin group for my Nextcloud server.

I have test emails working. I am using Postfix.

I understand users can get personal emails set up like so by configuring which notifications they want to receive on their Personal pages.

But what about admins?

I have a cron job set up to run every 15 minuets as stated in the Nextcloud documentation. I do not receive emails however.

My understanding is that Nextcloud administrators are getting the results of the cronjob emailed to them.

How is this done?

Please and thank you!

I do not receive emails however.

Could be missing MX record for your domain in your DNS.

Sanook - as mentioned I am successfully getting test emails. Postfix works. I am not even seeing mail being sent in my maillog. (I would see failed email if it was being sent).

I have added MAILTO=myemail@address.com to the top of the crontab file. Still nothing.

Did you threw an eye at the admin settings? 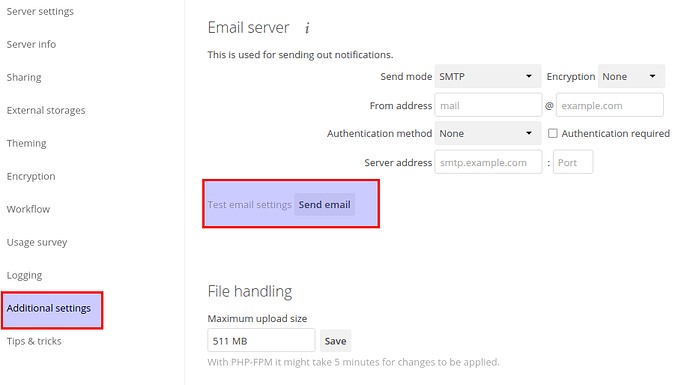 So with the help of timsen in the IRC chat, I solved the issue. Sorry Sanook, you were not understanding the issue.

I created a cronjob using crontab -u apache -e

As you can see every 6 hours it executes script.sh

This script is composed of:

The output looks like the stuff below. As you can see the part with “Scanning…” is removed with sed.