A user deleted a folder that was shared to group, how do I restore?

Simple scenario here. An admin account creates a folder and shares it with a group.

One of the group users, in Windows, deletes the shared folder on their system. It goes away only for them.

Now, the folder is gone just for them, but all the rest of the users are still accessing it fine.

How can I make this group shared folder reappear for that user again? I don’t want them being able to delete it like that, it’s a group share for a reason, so all the people in that group have it available! But I don’t see any option to restore it, to select it to sync again, to make it appear in their account. It’s not in trash either. All I want is to make it sync to that user again.

Is there any way to prevent a user from deleting shares they aren’t in control of? Selecting it to not sync (uncheck the box) is one thing, but in this case they just flat delete the entire folder and there is no way I see to restore it or tell it to sync again.

It would be nice if the desktop sync tool has some way of telling me that there are folders I technically have access to but are not currently in sync.

Even when I log in to the web interface and go to the “shared with you” section, it doesn’t list the group share folder that I’m a part of of.

This whole thing just leads to confusion and inconsistency. None of the interfaces tells me there is an available share in my group after it’s deleted, there doesn’t seem to be any way to enable it again.

How do I get it back for this user?

Backups are a wonderful thing.

Does UserA or UserB have the deleted folder in the recycle bin?

But even if they do, and in fact they probably would, having deleted it in Windows it would go to recycle bin; but let’s say they deleted it 4 days ago and since then the cloud folder has been changed a bunch, I wouldn’t want them restoring it and overwriting the newer stuff.

Plus why would a backup be necessary? It’s not like the folder is really gone, the owner still has it, all the other users in the group still have it. Just one user deleted theirs and now it’s gone from everywhere.

All I want to do is make it sync again since they are part of the group, they still technically have access to it, but it’s hidden now.

Not 100% sure, but I believe the only way to get this folder back for the one user (considering that changes directly in the DB could make things worse), you need to re-share that folder with the group.
So, unshare and share again.

As far as I know there is no way to forbid users to remove a shared file/ folder from his space. I could check for Group Folders if that applies for them too.

I cant’t believe that a CLOUD filesharing system like Nextcloud is as infunctional! Next to the German there are three other GOVERNMENTS using it. One can imagine how many thousands or dozens of thousand users will be connected amung each other. The number of people who don’t understand how shares or recycle bins etc work is high.

There must be a better protection of data!?
Usually one would say that “Group folders” is the answer, butsee here it seems to have major problems.

There is a hidden sub menu when you hover over Shares with a link to “Deleted shares” where all the deleted shares are listed. You can then restore the share. 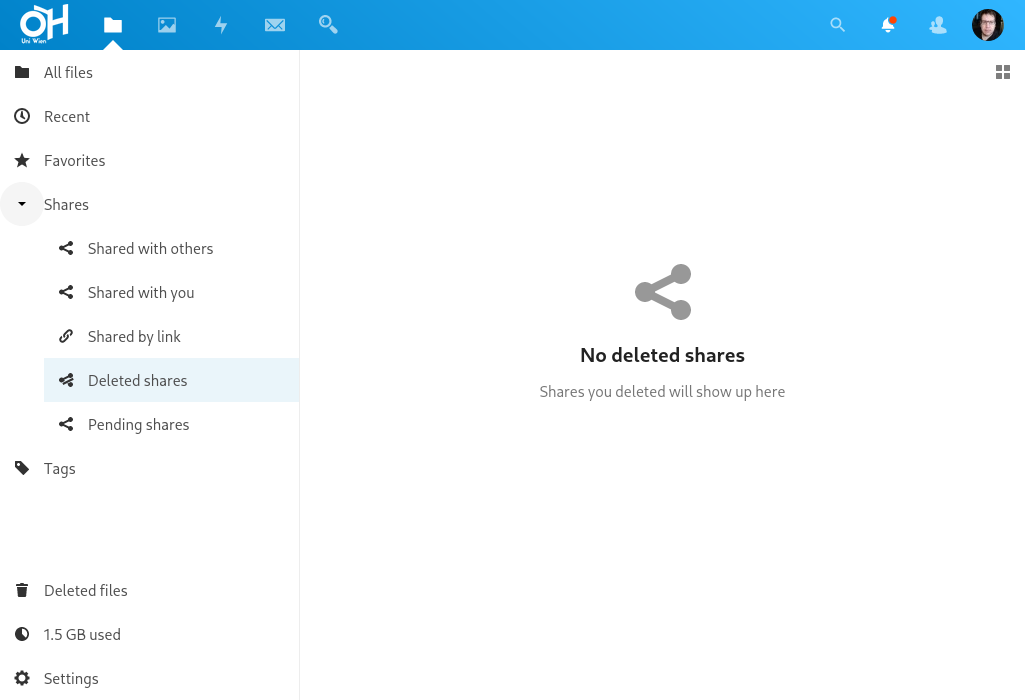 Note: I’m using Nextcloud 22. I don’t know when this feature was added or if it was always there.